Presidential dialogue in the Finnish capital

In a natural continuation of Finland’s advocacy of dialogue in international relations, Helsinki hosts a meeting between the presidents of Russia and the US.

The Helsinki Calling demonstration moves down Alexander Street on July 15, the day before the meeting between Trump and Putin.

Helsinki’s role as host of the meeting between US President Donald Trump and his Russian counterpart President Vladimir Putin is a natural continuation of Finland’s advocacy of dialogue in international relations.

Previous meetings in Helsinki between the leaders of the two countries happened in 1990, between Presidents Bush and Gorbachev, and in 1997, when Presidents Clinton and Yeltsin came to town.

Finnish President Sauli Niinistö, who described the talks as a welcome opportunity to reduce international tensions, welcomed the leaders to the meeting at the Finnish capital’s Presidential Palace. He also stated his own intention to raise Finnish and EU concerns about tensions in the Baltic Sea region and environmental issues in the Arctic. 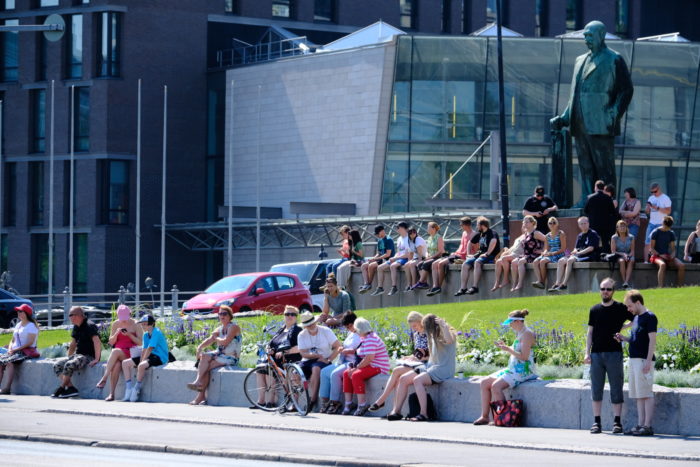 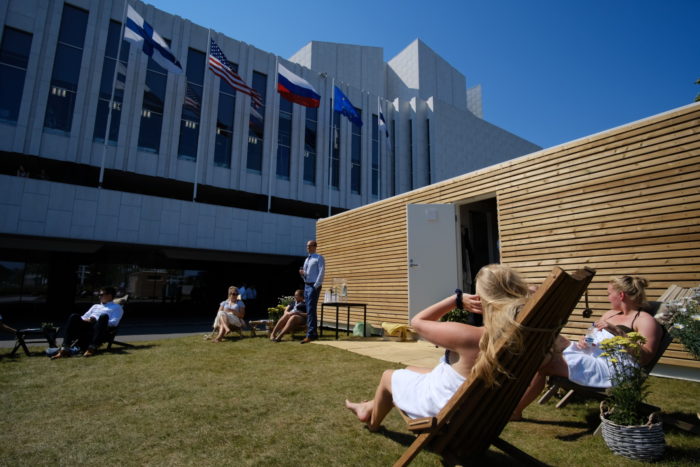 A sauna was installed behind Finlandia Hall so reporters at the press centre could get acquainted with this Finnish tradition while they waited for the presidents to hold their press conference. Photo: Tim Bird 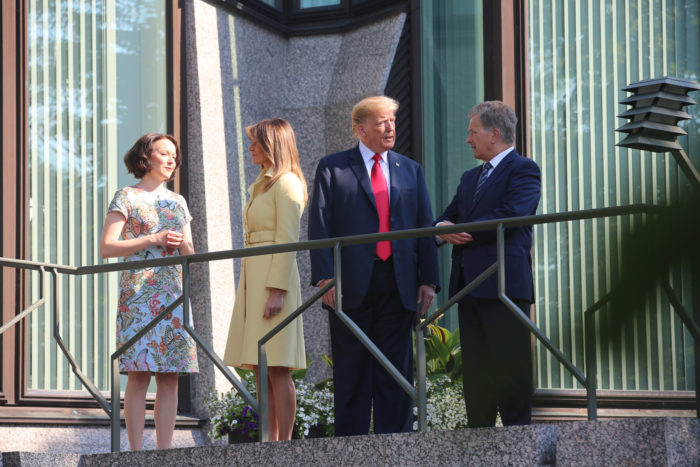 Finnish presidential couple Sauli Niinistö (right) and Jenni Haukio (left) show Donald and Melania Trump the view from the presidential residence Mäntyniemi in Helsinki. Photo: Juhani Kandell/Office of the President of the Republic of Finland 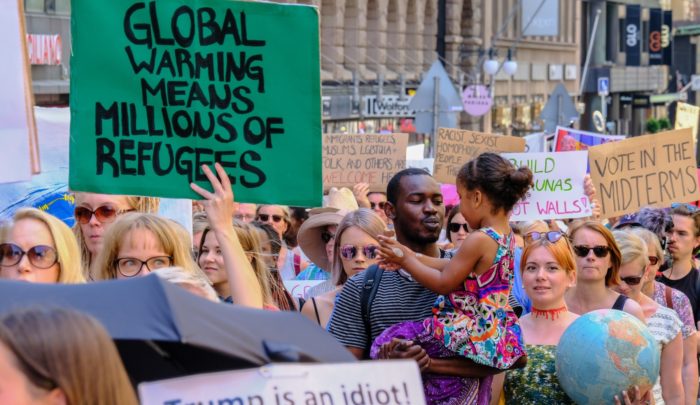 The fate of the world was one of the issues on the minds of Helsinki Calling demonstrators. Photo: Tim Bird 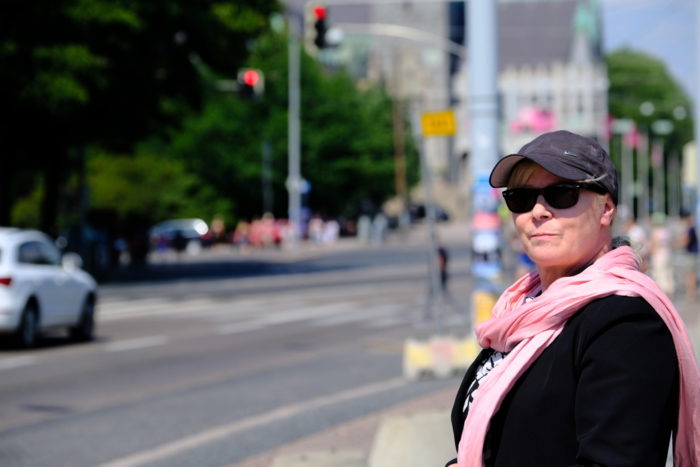 “It is a good thing for the world for different countries to meet and talk in peace,” said Elisa Saikkonen while waiting to see the presidential motorcades. Photo: Tim Bird

Niinistö received the preliminary inquiry from officials of both countries about a meeting in Helsinki just a few weeks before the actual meeting date of July 16, 2018. Even on such short notice, Finland was able to swing quickly into action, harnessing their talkoohenki, a Finnish word that implies both team spirit and everyone chipping in.

“One of the reasons for holding the meeting in Helsinki is the fact that Finland has a reputation as a well-organised country where everything works,” says Meira Pappi, country branding expert at the Ministry for Foreign Affairs of Finland [which also produces ThisisFINLAND]. “People know that we are able to put something of this scale together in such a short time.”

Media representatives visiting the press centre found the same sort of efficiency. “We wanted to live up to our ranking as the happiest country in the world and make the working experience fun, as well,” says Pappi. The press centre was set up in Finlandia Hall, a Helsinki landmark. “Journalists could watch the World Cup final at the media centre, visit a sauna installed in the park behind the building, and enjoy Finnish delicacies.” 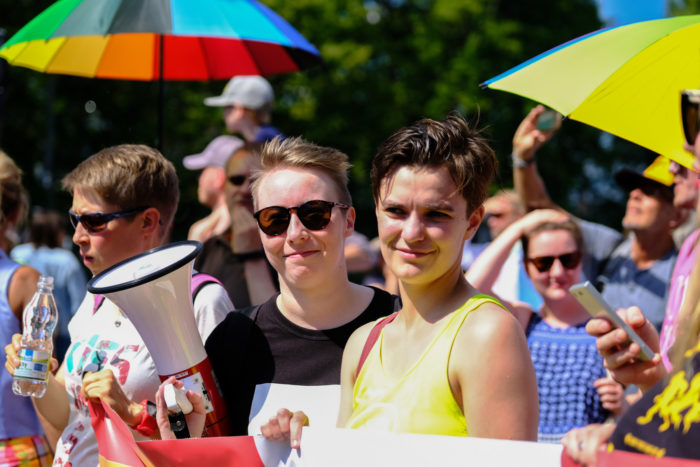 Viima Lampinen (black shirt and sunglasses), chair of Seta, Finland’s advocacy organisation for LGBTI rights, says, “We needed to show solidarity with the people who have been harmed by the politics that the two leaders represent.”Photo: Tim Bird

Meanwhile, in the midst of a heatwave, Helsinki’s streets were turned into a shifting platform for 16 demonstrations as citizens took the opportunity to express their feelings towards the high-level visitors. Demonstrations took place on Sunday, July 15 and on the day of the meeting, Monday, July 16. The biggest one belonged to Helsinki Calling, a coalition of concerned citizens representing all shades of the political spectrum.

“We’re a very broad network of academics, journalists, civil society and others that has come together to talk about issues that Trump and Putin choose not to address,” says University of Helsinki lecturer and Helsinki Calling activist Nely Keinänen.

Those issues include human rights, press freedom and the environment. “For me the turning point came with the election of President Trump, whom I have been watching with both fascination and fury,” says Keinänen. “I don’t agree with anything he says or does. When we heard he was coming here I thought, now I have the opportunity to make my voice heard.”

Viima Lampinen, chair of Seta, Finland’s advocacy organisation for LGBTI rights, and a speaker at the Helsinki Calling march, makes it clear that the focus was on both leaders: “We needed to show solidarity with the people who have been harmed by the politics that the two leaders represent. The meeting attracted more than 1,400 media people from around the world and we want our protests to be widely covered.” 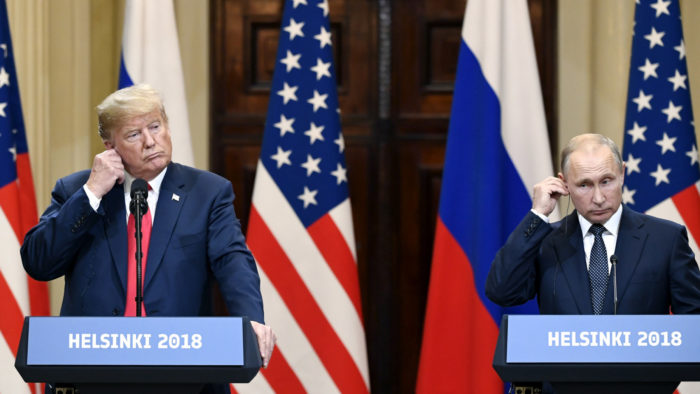 Elisa Saikkonen was among a crowd of locals gathered along Mannerheim Road to catch a glimpse of the presidential motorcades. “I think there is a good chance they’ll have a successful meeting here,” she said. “I don’t expect them to make any big decisions but it is a good thing for the world for different countries to meet and talk in peace.”

The Russian and American presidents talked with each other, and also with Niinistö. At the end of the day the Finnish president talked to reporters who were still trying to sort out what Trump and Putin had said at their press conference.

“The main message from Helsinki seems to be that those two leaders are prepared to continue their discussion on several different difficult issues,” said Niinistö. “And if that is the case, well, then I consider it as a positive. We all have been pointing out that, in spite of everything, dialogue is needed.

“Now there’s dialogue. I hope that it continues, and hope that they also find some answers to those difficult questions put forward today.”

An exercise in diplomacy

“The significance this time is that the Finnish situation in global and regional affairs is quite different,” says Suvi Kansikas, researcher at Helsinki University’s Centre for European Studies, when we speak to her a few days before the American and Russian presidents arrive in Helsinki. “Finland has been part of the EU since 1995, so it can no longer be described as neutral, although it is militarily non-aligned. It is no longer so much a mediator between East and West. The world has also changed since the last meeting in 1997, and our President might now have the opportunity to address the issues that Finland is interested in, for example, regional Arctic and Baltic issues.”

Kansikas sees the meeting as an exercise in regular diplomacy, and although she does not count out the possibility of some announcements, neither does she expect any major decisions to be made this time in Helsinki.

“From a European perspective, I think it’s good that the meeting is being held in the EU, since Europe can be included on the agenda,” she says, adding that Finland’s political stability made Helsinki a natural choice for the venue. “Finland maintains a good knowledge of Russia and Finns travel there often, and there is a constant stress on needing to maintain a dialogue with Russia. But you would need to look hard to find the kind of East-West dichotomy that was found in Finnish politics during the Cold War.”

Presidents cross paths in Helsinki: A look back
Life & societyPolitics

Presidents cross paths in Helsinki: A look back

The eyes of the world are on Helsinki as Presidents Donald Trump and Vladimir Putin hold a meeting on July 16, 2018. But this isn’t the first time that world leaders choose to meet in the Finnish capital. See our slideshow.