The day Tea Karvinen photographed these young Ural owls at Sipoonkorpi National Park, just outside Helsinki, their mother attacked the ornithologist who was trying to outfit them with ID rings.

Entitled simply The National Parks of Finland, Karvinen’s epic overview of the country’s best-loved natural assets is based on seven years crisscrossing the length and breadth of Finland. She spent more than 700 days exploring and photographing the country’s 40 national parks, travelling by foot, ski, skate, snowshoe, canoe, kayak, rowboat and even helicopter. You can see some of the resulting pictures in our slideshow, below.

Karvinen, whose first name, Tea, is pronounced as two syllables, unlike the English word “tea,” grew up in Helsinki. Despite her city upbringing, she has felt the call of the wild and the call of the far north ever since she was a child. Today she lives in Finnish Lapland, a short distance from the Arctic Circle. In the 1990s she studied photojournalism at the University of Alaska.

In 2001, while working at a ski resort in the US, she got hooked on skeleton sledding, which involves hurtling down an icy track headfirst on a small open toboggan. She went on to represent Finland at the international level for nine years.

“Then about ten years ago, when I was sitting out all night alone in a bear-watching shelter in northeast Finland with plenty of time to think, I decided to focus my life on nature photography,” she says. “This eventually led to my project of photographing all of Finland’s national parks.” 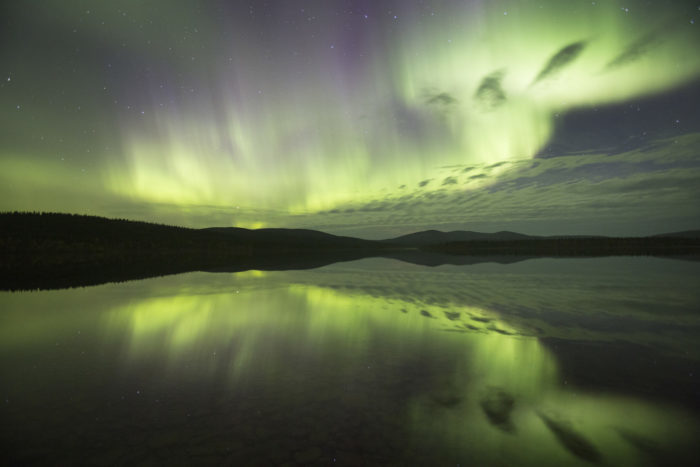 The Northern Lights, Aurora Borealis, dance in the sky – and on the water – in the northeastern national park named after the late Urho Kekkonen, who was president of Finland from 1956 to 1982. Photo: Tea Karvinen 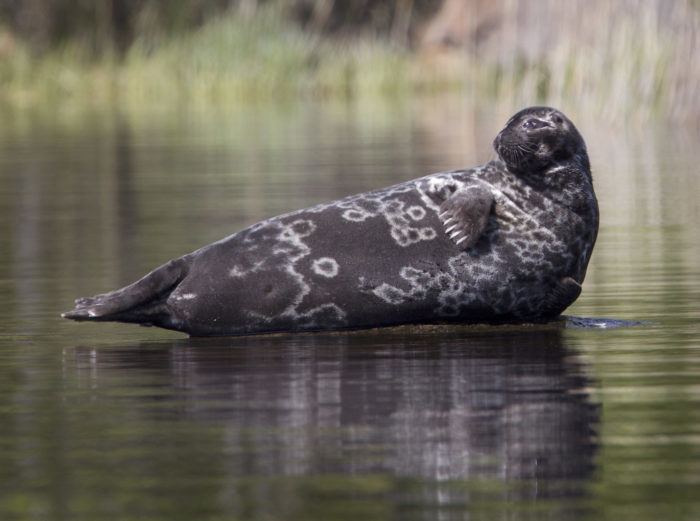 A Saimaa ringed seal sunbathes on a rock in Linnansaari National Park, on Finland’s largest lake, Saimaa, in the eastern part of the country. The lake’s unique population of fewer than 400 freshwater seals is endangered by climate change and the use of fishing nets. Photo: Tea Karvinen 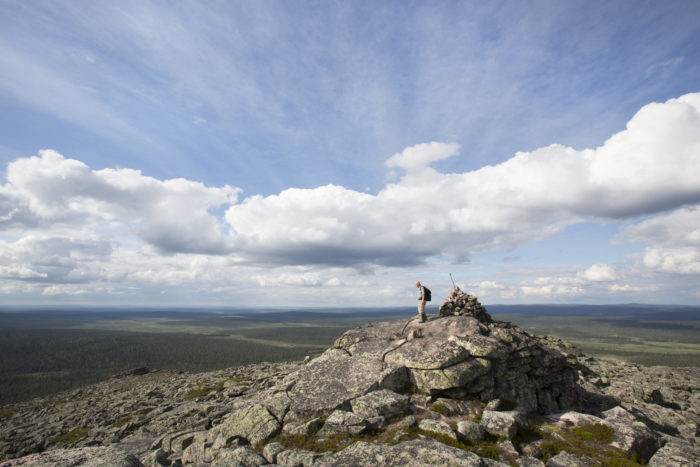 On top of the world: You’ll be close to the wide open sky while hiking in Urho Kekkonen National Park in the Finnish far north. Photo: Tea Karvinen 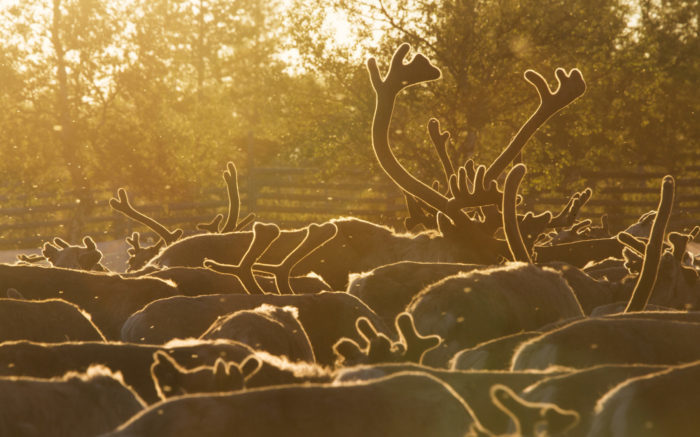 Shining from a low angle, the sun lends a glowing outline to the antlers and bodies of these reindeer in northern Finland. Photo: Tea Karvinen at Pallas-Yllästunturi National Park 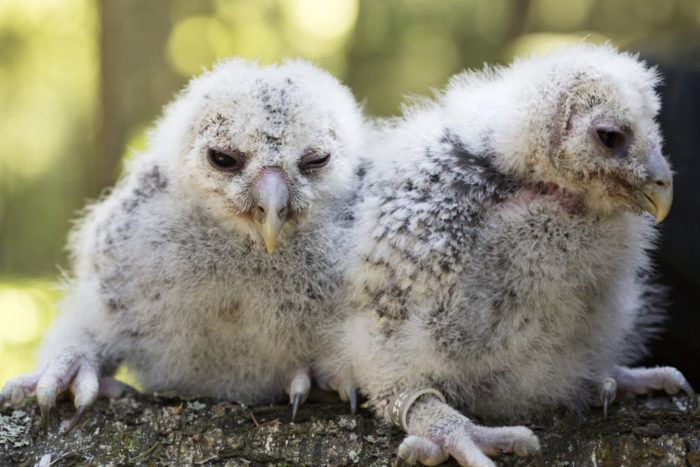 The day Tea Karvinen photographed these young Ural owls at Sipoonkorpi National Park, just outside Helsinki, their mother attacked the ornithologist who was trying to outfit them with ID rings. Photo: Tea Karvinen 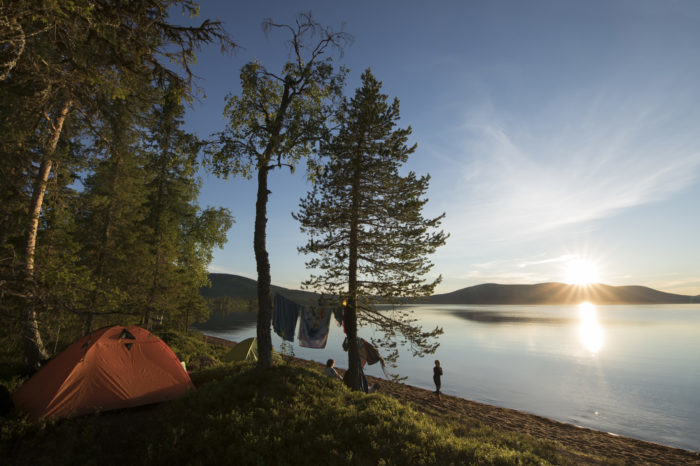 Enjoying the view from the “front porch” while camping by a lake in Pallas-Yllästunturi National Park in northwestern Finland. Photo: Tea Karvinen 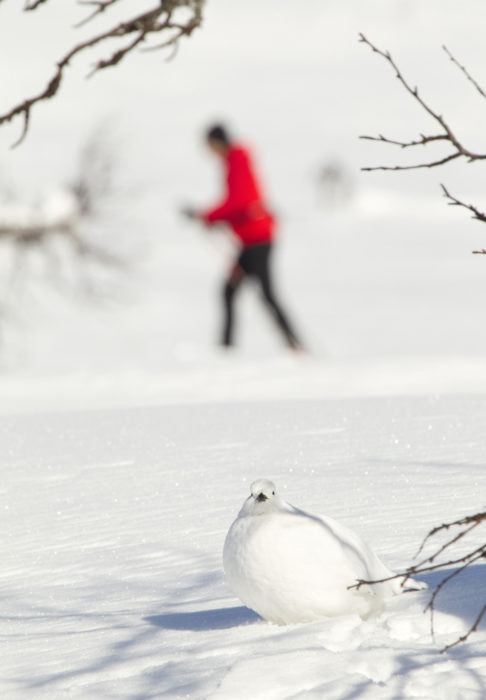 We know the skier is out of focus, but did you notice the bird in the foreground, in its white winter plumage? The willow ptarmigan changes from brown to white as winter arrives. Photo: Tea Karvinen at Pallas-Yllästunturi National Park 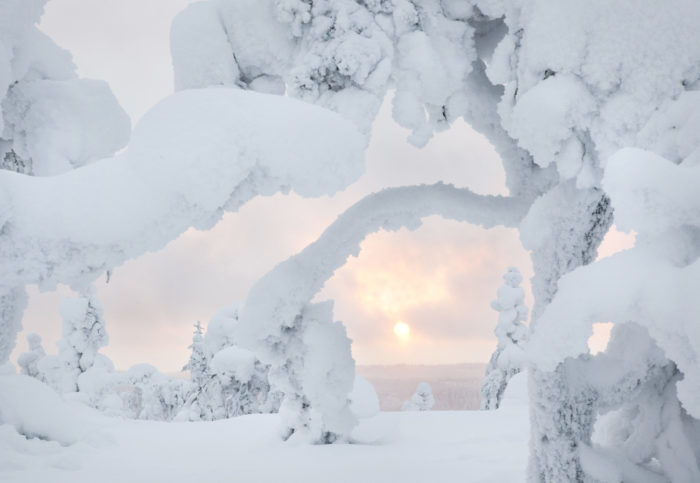 Snowstorms give the Finnish forest a winter plumage of its own, and even at noon the sun stays lower in the sky. Photo: Tea Karvinen at Koli National Park 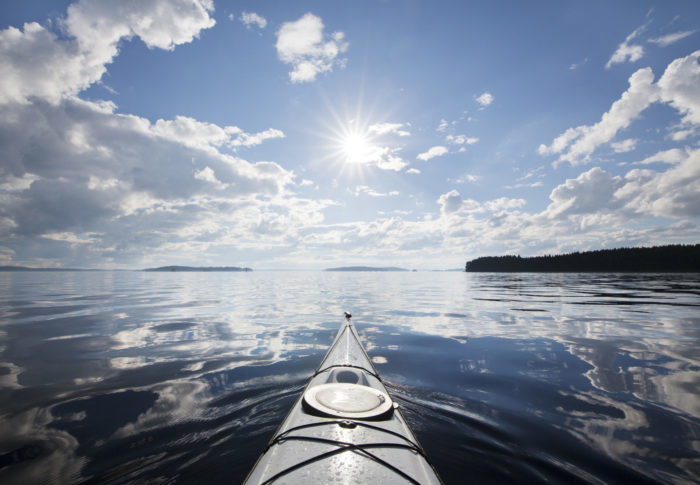 Point your kayak across the lake at Päijänne National Park; it’s a beautiful day to be outdoors in southern Finland. Photo: Tea Karvinen 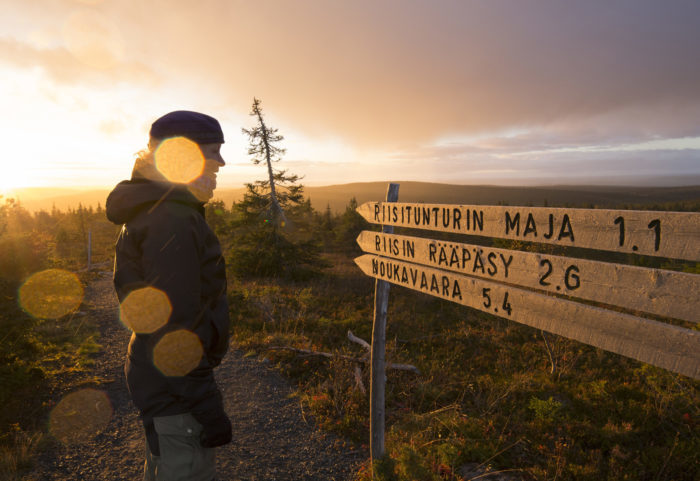 Getting a sense of direction: Riisitunturi National Park is located close to the Arctic Circle. Photo: Tea Karvinen 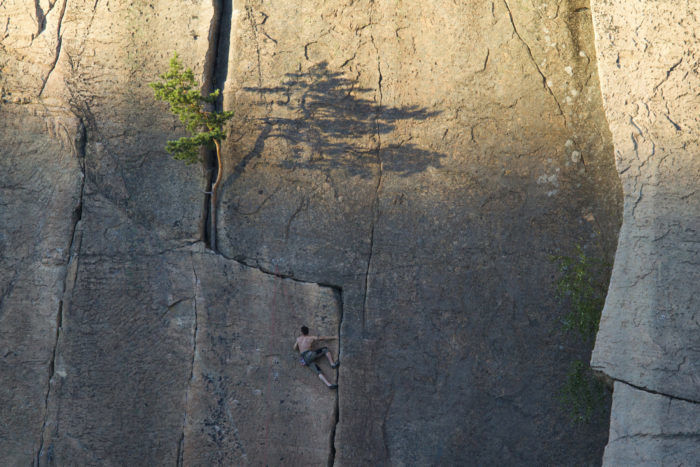 A rock climber ascends a cliff face in Repovesi National Park in southern Finland, only to find that a tree has beaten him to it. Photo: Tea Karvinen 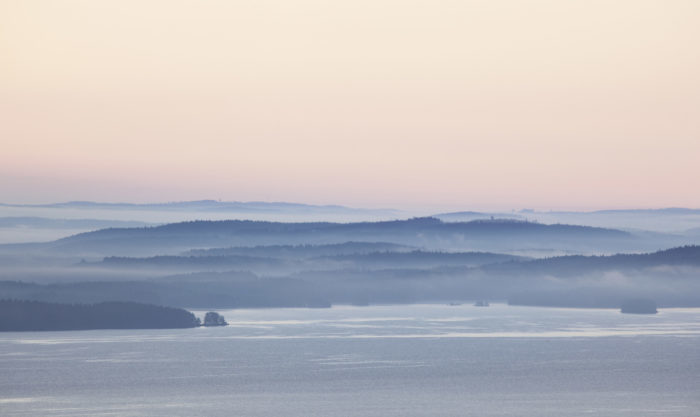 Lake Pielinen, in Koli National Park, in the eastern part of the country, is dotted with islands and surrounded by forested hills. Such beautiful scenes are typical of Finland, which is 70 percent forest and contains 187,888 lakes. Photo: Tea Karvinen 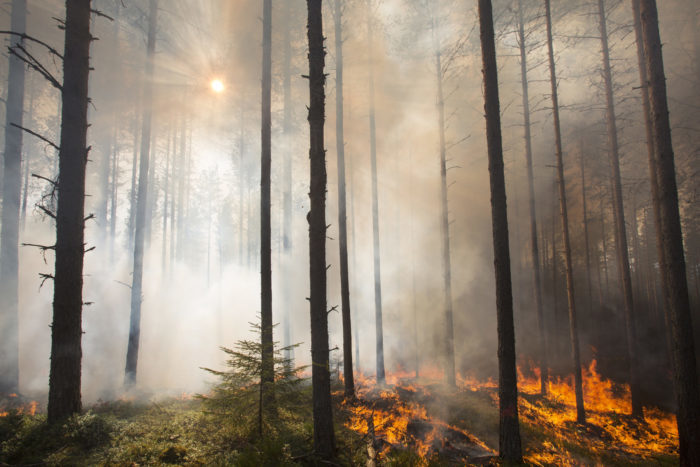 While compiling material for her book, Karvinen met and interviewed more than 150 people who know the parks well, including national park rangers, scientists and local residents with colourful stories to tell. But she also loves to explore the wilds alone.

“I find this the best way to connect more deeply with nature, and give my full attention to observation and photography,” she says. “Perhaps I’m a bit of a social hermit, since though I like good company, I often need to be alone. Even in the wildest places, I never feel lonely or unsafe.”

She has nevertheless endured some narrow scrapes during her trips. In Teijo National Park she sank up to her thighs in a bog while shooting rare marsh flowers. In Koli, a huge snow-covered spruce tree suddenly came crashing to the ground just a couple of metres from where she was capturing a snowy scene, fortunately leaving her unharmed. And in Sipoonkorpi, a huge, aggressive mother Ural owl attacked her ornithologist interviewee while he was putting ID rings on two fledgling owlets, whose photo appears in the book.

Karvinen is reluctant to name her favourite park, but she loves the variety of Finland’s national parks: the wild open arctic fells of the far north; the vast, ancient inland forests; the countless windswept rocky islands of the Baltic archipelagos. “It’s worth visiting them at different times of year,” she says. “I especially love early summer, when everything is fresh and green; autumn when the forests are full of colour and the aurora borealis starts to shine in the northern night sky; and midwinter when the scenery is covered with a blanket of pure white snow.” 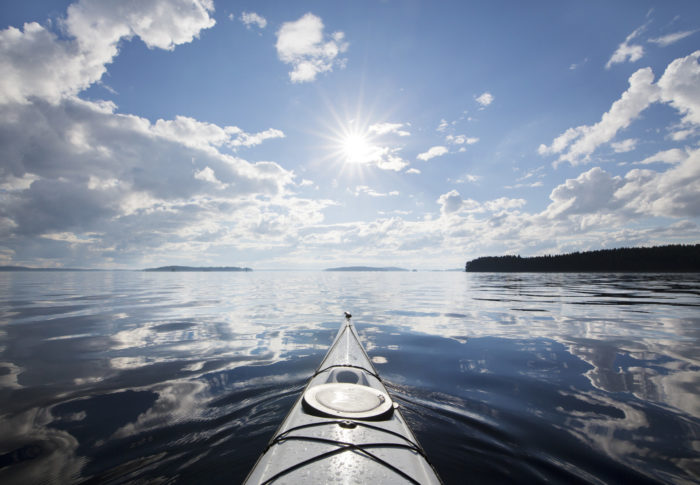 Point your kayak across the lake at Päijänne National Park; it’s a beautiful day to be outdoors in southern Finland.Photo: Tea Karvinen

She hopes her book will inspire readers to get out into Finland’s national parks and other natural places. “Getting close to nature is good for your physical and mental wellbeing,” she says. “If nature becomes important in people’s lives, this will also encourage them to cherish and preserve our precious natural places.”

Karvinen feels that Finland’s impressive network of national parks includes plenty of wonderful places for foreign visitors to discover. Though people from other cultures often find large forests scary, she emphasises that there’s nothing to fear if you take care: “For newcomers it’s best to follow trails, or go with a local guide, or a good map, compass and GPS, if you want to get off the beaten track and discover ‘the real Finland,’ away from the cities.”