At an underground depth of 420 metres, Finland is building a final disposal facility for spent nuclear fuel.

In Finland, work is progressing on the world’s first landfill for highly radioactive nuclear waste. The 420-metre deep access tunnel to the repository is already excavated.

If X, then Y. This is the Finnish view, at least, when it comes to the final disposal of nuclear waste: X equals waste created by nuclear power plants, and Y equals barriers to prevent particles from spent fuel rods from reaching the biosphere.

Forty-one countries use nuclear energy, but Finland is the first nation in the world to line up a final storage place. They’re calling it Onkalo, which means “cave” in Finnish. Plans also exist in the US and in Sweden, which is cooperating with Finland in these matters.

Back in the early 1980s, Finland’s nuclear power plant operators realised that the nuclear waste had to go somewhere. The country has nuclear power facilities in two locations: Olkiluoto on the west coast and Loviisa on the south coast. 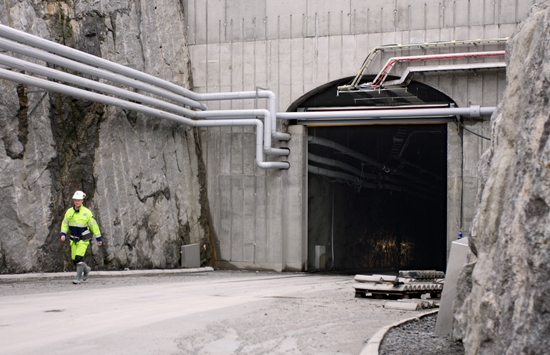 Enter here to follow the access tunnel that winds gradually down through the rock to a depth of more than 420 metres.Photo: Posiva Oy

“We were pragmatic, and even then knew that if we produced radioactive waste, we would also be responsible for disposing of it safely,” says Timo Äikäs, vice president of Posiva Ltd, which has been in charge of Finland’s project for a future disposal facility since 1995.

Until 1996, spent fuel from Finnish nuclear power plants was transported to Russia for reprocessing. In 1994 the Finnish Parliament had ruled to prohibit importing and exporting radioactive waste and reprocessing nuclear waste abroad. The solution was to transport highly radioactive waste from TVO’s Olkiluoto facilities and from Fortum to temporary storage in Loviisa, 400 kilometres away. After cooling down for 50 years, it will be buried forever deep in the granite.

In the future, the spent fuel from both energy companies will be sent to Onkalo, situated on the Olkiluoto peninsula on the idyllic Gulf of Bothnia, in the nuclear-energy-friendly town of Eurajoki.

Posiva Ltd, a subsidiary of the two energy companies, began construction of Onkalo in 2004. However, they started searching for a suitable location as early as 1983, performing geological, hydrological and geochemical investigations all over Finland.

“The only option we have in Finland is the crystalline bedrock,” says Äikäs. “A long search, which lasted until 2000, verified that the locations we tested are all quite similar scientifically and technically. They all meet the conditions for safe storage.

“A nuclear power plant and infrastructure already existed on the Olkiluoto peninsula. We also knew that the majority of spent fuel accumulates there, so the transport distance would be short. Loviisa, on the other hand, produces far less radioactive waste.” 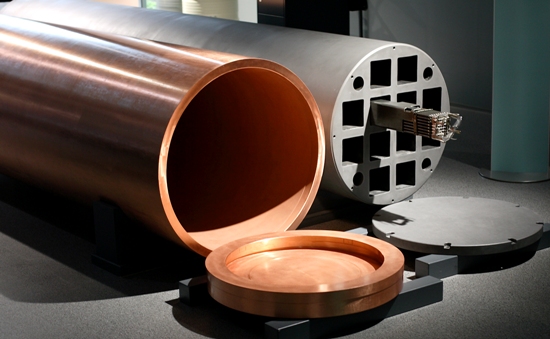 The spent fuel will be placed inside a graphite cast iron honeycomb (right) contained in a copper canister (left).Photo: Posiva Oy

The disposal is based on a multibarrier system of technical solutions: Pure copper canisters contain honeycombs made of graphite cast iron. The canisters are surrounded with a waterproof bentonite clay buffer, as well as the natural barrier of stable granite, which is not temperature-sensitive.

There the radioactivity will be held in check for at least 100,000 years, surrounded by bentonite clay inside a shaft drilled and blasted through the granite to a depth of 420 metres.

Could the barriers withstand a new ice age? Humanity has yet to succeed in building something that will last forever. The Fennoscandian bedrock is, however, among the oldest geological formations in Europe.

“Let me think how old the rock is here,” says Posiva geologist Kimmo Kemppainen when asked about the safety of Finnish granite. “It has survived almost 1.8 million years. This is a fairly long period, during which several deformation phases have produced no huge changes.” 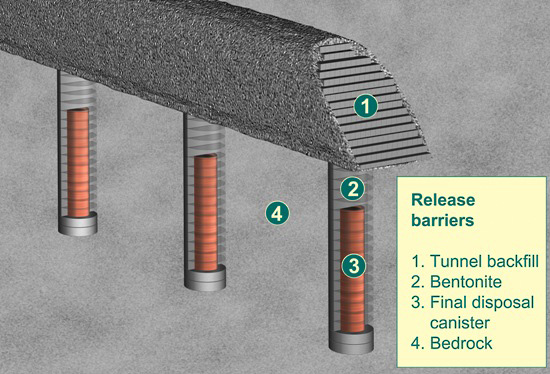 Four of the barriers that prevent the nuclear waste from being released.Photo: Posiva Oy

What’s next? So far the Onkalo access tunnel has been completed, and currently serves as a sort of underground laboratory. Soon the two ventilation shafts and employee shaft will be complete. Planning permission for the actual repository is set for 2012.

Next on the list are the encapsulation plant and the first of the deposition tunnels where the canisters will be housed. If all goes well for Posiva, they will request an operating license from the government in 2018 and the repository will open in 2020.

The estimated total cost of the facility equals three billion euros. It will accept nuclear waste for at least 100 years before being sealed forever. Time will tell whether Onkalo remains the only facility of its kind; Fennovoima has now joined TVO and Fortum as a nuclear power plant operator and must, within the next six years, either form an agreement with Posiva or submit plans for its own final disposal facility.