After Finnish election, anything can happen

In the 2015 Finnish parliamentary election, the Centre and the Greens bounced back. So did guesses about the next coalition.

Juha Sipilä, whose Centre Party was the biggest winner in the 2015 Finnish parliamentary election, takes a closer look at the screen on election night as results begin to roll in.

In the 2015 Finnish parliamentary election, the Centre Party and the Greens staged comebacks to increase their numbers of MPs, and were the only parties to do so. There’s still plenty of room for speculation about the composition of the upcoming government.

With all the votes counted, the main result is exactly as predicted: The conservative Centre Party, which in 2011 had suffered a huge loss and been relegated to the opposition, rose to the surface again, jumping from 35 seats in the 200-person Parliament back to 49, just two MPs shy of its pre-2011 total. Meanwhile the populist “Finns” Party treaded water, losing one seat and keeping 38 to claim second place just ahead of the moderate conservative National Coalition Party, which lost seven and was left with 37. The Social Democrats are still in the game with 34 MPs, but this represents a drop of eight seats and continues a downward trend for them. The Greens bounced back to reclaim the five seats they lost in 2011, for a total of 15, and became the only other party besides the Centre to increase their representation. The Left Alliance came up short with a loss of two seats but held on to 12, while the Christian Democrats were taken down a notch, dropping from seven to six. The Swedish People’s Party, which gains its support mainly from speakers of Finland’s other official language, holds steady at nine MPs, as it has for the past several terms. 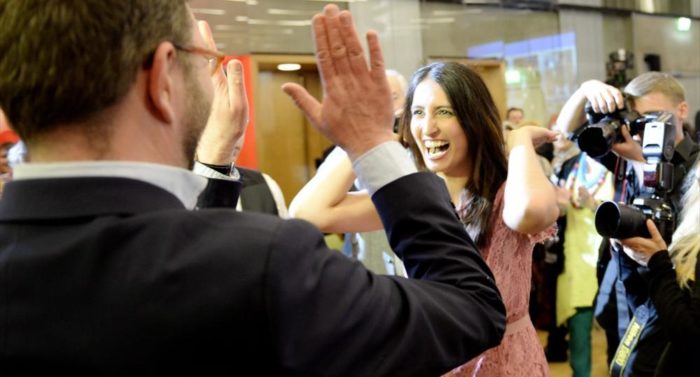 Nasima Razmyar celebrates with Social Democratic Party colleagues upon learning that she has been voted into Parliament.Photo: Antti Aimo-Koivisto/Lehtikuva

Four years ago, the “Finns” Party refused to consider joining the government because of a campaign promise not to support a bailout package for Greece. In the run-up to this year’s election, they were careful to suggest no such conditions. In fact, they openly dropped hints that they were ready for possible participation in the next government. Anything can still happen, and the pundits can have fun speculating until at least early May, but the Centre’s Juha Sipilä will surely become Prime Minister. It’s quite likely that he will form a government coalition consisting of the “Finns” Party and either the Social Democrats or the National Coalition. Either combination puts the total over 120, the amount considered necessary for an effective coalition. All this makes it unlikely that we will see a repeat of 2011, when it took a couple months – unheard of in Finland – to put together a patchwork government composed of six different parties, including the Social Democrats and led by the National Coalition. In a subplot of the election story, it remains to be seen whether the Swedish People’s Party will continue to form part of the government – it has been a member of the ruling coalition for the past 36 years. None of the other parties may be written off, either. 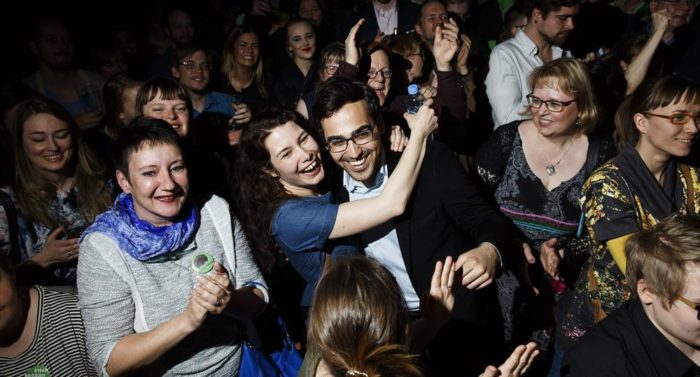 Emma Kari hugs Ozan Yanar (both Greens) as results come in showing that they have both won seats in Parliament. The Greens and the Centre were the only parties to increase their numbers of MPs this time.Photo: Roni Rekomaa/Lehtikuva/STR

There may be a more telling trend here for those who look – one that is perhaps more meaningful to young voters than the posturing of various party heavyweights while a government coalition attempts to coalesce. Slowly the face of Finnish politics is changing, as is the face of Finland, although to find this change you need to look beyond the Centre and the “Finns” Party. After gaining its first black member of parliament in 2011 (actor Jani Toivola, who has been re-elected for the Greens), Finland now has its first two modern-day immigrant MPs: Nasima Razmyar (Social Democrats), who was born in Afghanistan and moved to Finland at the age of eight, and Ozan Yanar (Greens), who was born in Turkey and moved to Finland at the age of 14. (Their precursors were an Estonian-born Finn in the mid-1940s and a Swedish-born MP who just finished a term representing the semi-autonomous Åland Islands.) It’s also worth noting that in the Helsinki election district the National Coalition took first place and the Greens added voters to achieve a strong second, trailed by the Social Democrats, the “Finns” Party and the rest. The Finnish capital also garnered the highest voter turnout out of all 13 districts, with 74.9 percent of those eligible casting their votes. Nationally voter turnout reached 70.1 percent, respectable but still 0.4 percentage points less than in 2011. The average age of the MPs fell slightly to 47.3, and there are now 34 MPs under the age of 35. The youngest is 24, while the oldest is 74. Although the number of women in Parliament decreased by three, many young women won seats, including Razmyar, Li Andersson (Left Alliance) and Susanna Koski (National Coalition Party).