A photographic leap through time in the Finnish capital

Our photographer discovers new ways to see Helsinki when he revisits locations immortalised more than a century ago by the renowned I.K. Inha.

Separated by a century: Snellman Street (left) and Nikolai Street (right) are the new and old names for a road in the Helsinki neighbourhood of Kruununhaka.

Renowned photographer I.K. Inha documented the Finnish capital more than 100 years ago with glass-negative exposures. We discover new ways to see Helsinki by juxtaposing his pictures with digital photos taken today from the same angles.

In 1910, WSOY published Helsingin opas (A guide to Helsinki). The book contained 60 pictures of the Finnish capital by Into Konrad Inha (1865–1930), a photographer more famous for travelling the countryside to capture landscapes on film during a period that was significant in the development of the Finnish national identity.

In 2009, WSOY printed a book of Inha’s Helsinki photos, including about 130 pictures that had not been used in 1910, called Helsinki – Valon kaupunki (Helsinki: City of light). ThisisFINLAND obtained permission to put some of these pictures online, and photojournalist Tim Bird revisited the locations to show you what they look like today. The comparisons are striking – some because of how different the locations look, but others because of how little has changed.

“After 20 years in Helsinki, there aren’t many parts of the city I haven’t seen, but it was nice to rediscover some neighbourhoods,” Bird says. “There were nice surprises as well as negative ones.” The result is a fascinating experience – part documentary, part art and part nostalgia – that takes viewers through a cross-section of modern and historic Helsinki. 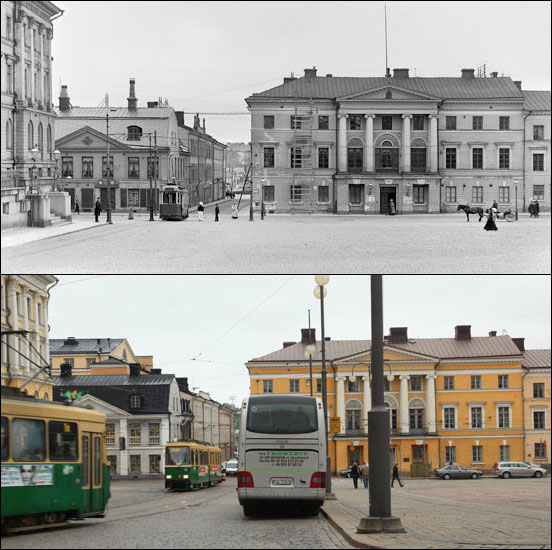 Top: The southeast corner of Senate Square was bordered by City Hall (right) and the Senate building (left). Nowadays the former is still used for city functions, while the latter is called Government Palace... Bottom: ...and houses the offices of the Prime Minister, the Chancellor of Justice and the Minister of Finance. The low grey building on the corner, the Sederholm House built in 1757, remains the oldest building in downtown Helsinki. Photos by I.K. Inha and Tim Bird 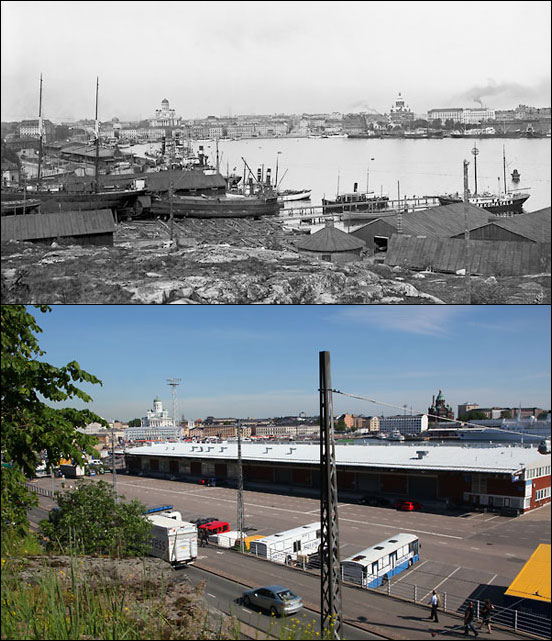 Top: "A sight to enchant the eye of the seasoned city-dweller, not to mention that of the visitor," read the text that accompanied Inha's photo from the embankment overlooking South Harbour. Bottom: One hundred years later, the Lutheran Cathedral (formerly known as Nikolai Church, left), the Orthodox Church (right) and most of the harbourfront buildings remain very much the same, but a ferry terminal has replaced the shipyard in the foreground. Photos by I.K. Inha and Tim Bird 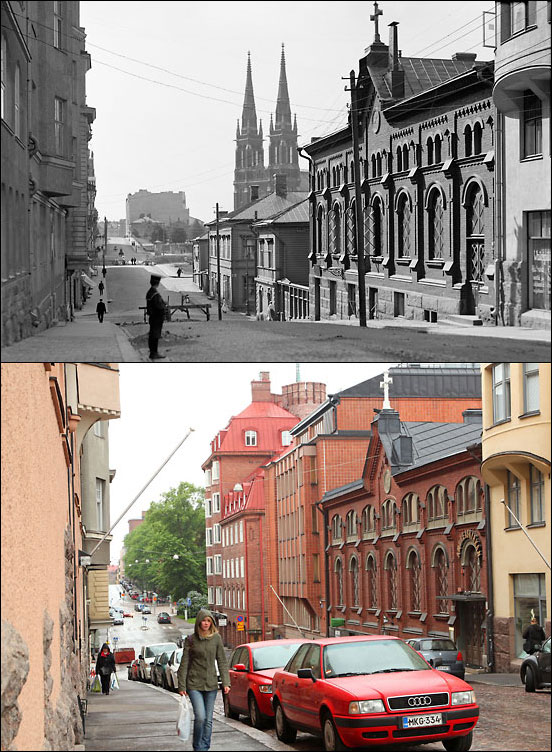 Top: The shape of the hill on Korkeavuorenkatu (Tall Mountain Street) and some of its buildings were the same in 1910, including Johannes Church with its two towers, completed in 1891. Bottom: Note how the cars make the street look narrower. The low wooden houses on the right have given way to taller brick buildings – one church spire is still visible at the top of the picture. Photos by I.K. Inha and Tim Bird 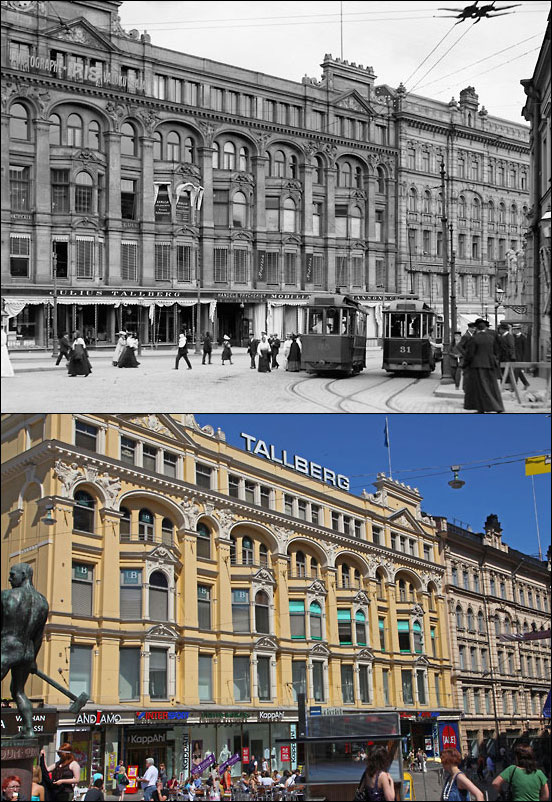 Top: At least three tram lines crossed paths at Raitiotori (Tram Square), where present-day thoroughfares Mannerheimintie and Aleksanterinkatu intersect. If you’ve been to Helsinki you’ll recognise the building in the picture... Bottom: ...as the one across from the Stockmann department store, where trams still rumble past. Founded in 1862, Stockmann has been located in this neighbourhood since the 1920s, while Felix Nylund’s famous Three Smiths statue (left) did not enter the scene until 1932. Photos by I.K. Inha and Tim Bird 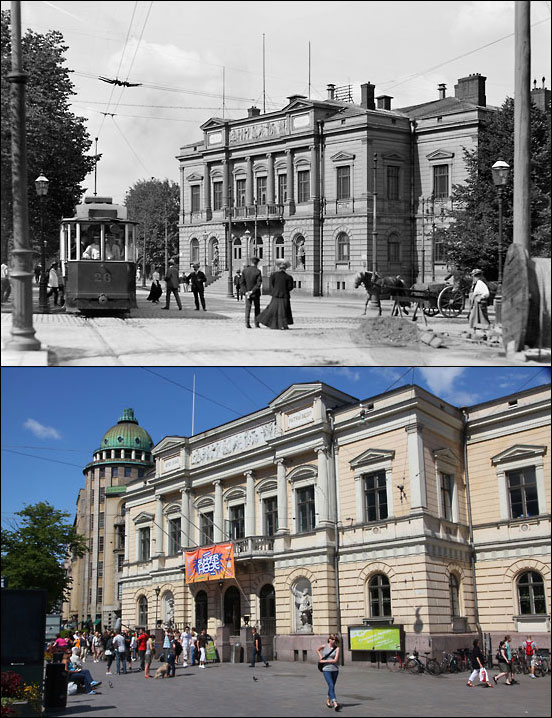 Top: Just around the corner, Ylioppilastalo (Student House) hasn’t changed much... Bottom: ...but the city has grown up around it. Photos by I.K. Inha and Tim Bird 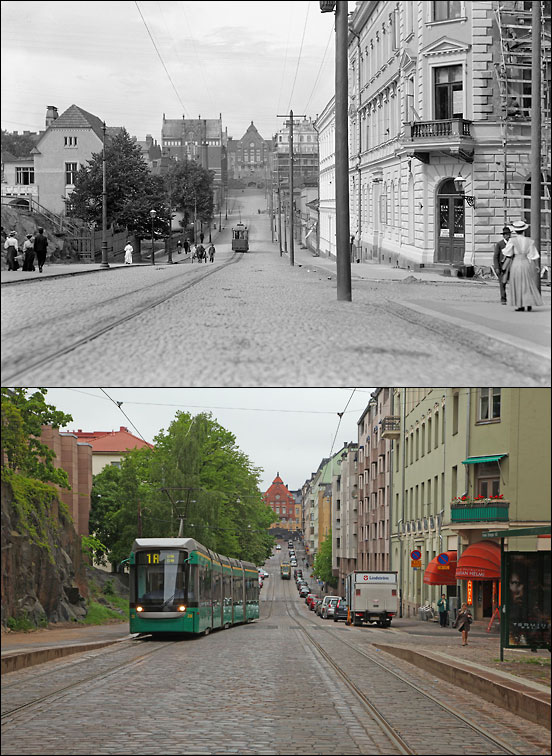 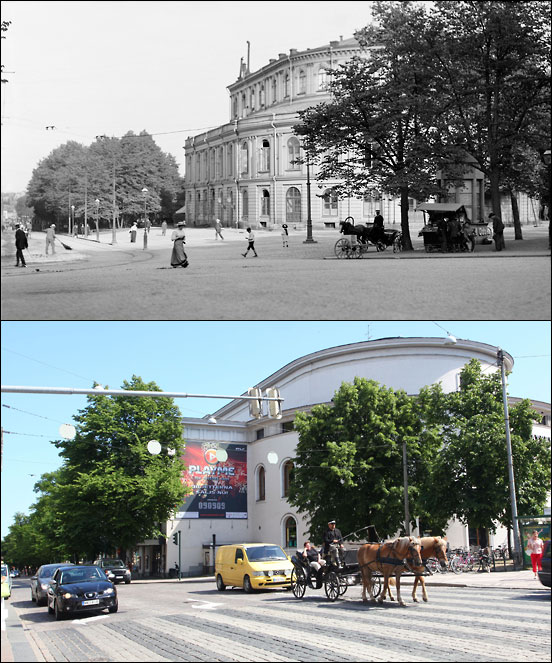 Top: The Swedish Theatre was built in 1866 on the same site as the previous theatre, which had burnt to the ground. At the time when Inha was shooting this series, Finnish speakers already made up more than 50 percent of the population of once predominantly Swedish-speaking Helsinki. Bottom: Today about 6 percent of Helsinki speaks Swedish as its first language, while 84 percent speaks Finnish, but the Swedish Theatre is still going strong – and you can still ride a horse-drawn buggy down the Esplanade. Photos by I.K. Inha and Tim Bird 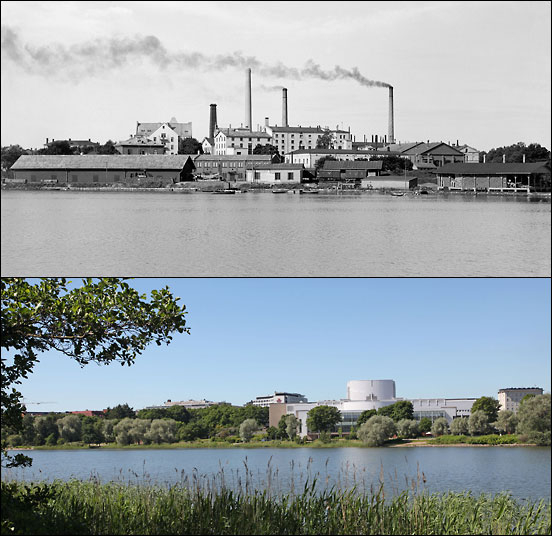 Top: The neighbourhood of Töölö had not yet taken shape in 1910, and the shore of Töölö Bay was occupied by Töölö Sugar Factory. Bottom: Today the National Opera House, home of the National Opera and National Ballet since 1993, stretches along the same waterfront. Its glass and stone façade breathes no indication of the smokestacks that used to stand there. Photos by I.K. Inha and Tim Bird 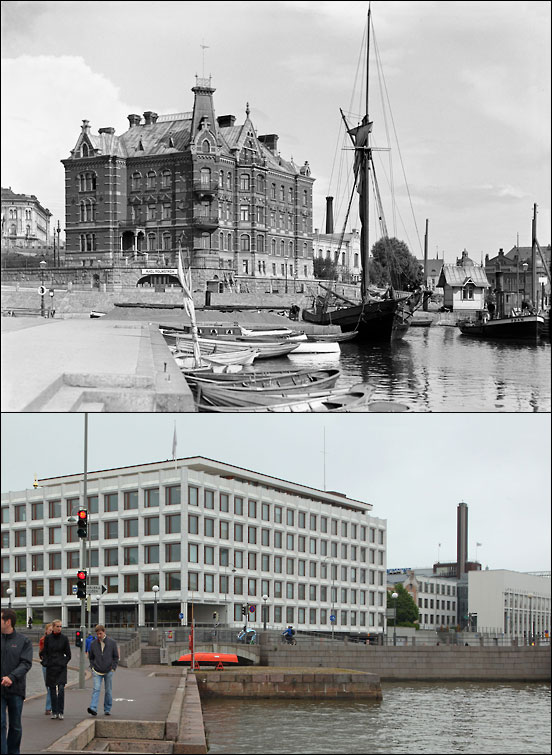 Top: Helsinki City Council Chairman Alfred Norrmén had this house built in 1897. Bottom: In 1960 Norrmén’s house was torn down, to be replaced by the new headquarters of Finnish forestry company Enso-Gutzeit, the precursor of Stora Enso. The new building was designed by Alvar Aalto. Photos by I.K. Inha and Tim Bird 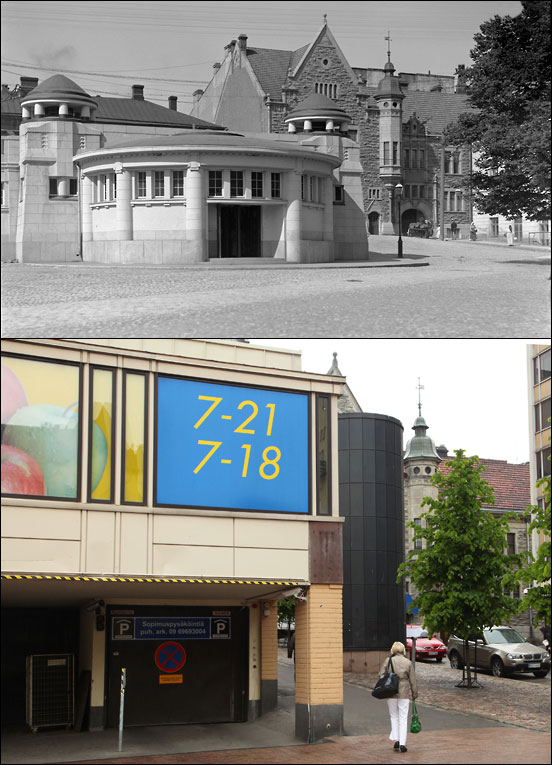 Top: Why would they replace this market hall on what is now Kasarmitori (Barrack Square)... Bottom: ...with this? Photos by I.K. Inha and Tim Bird 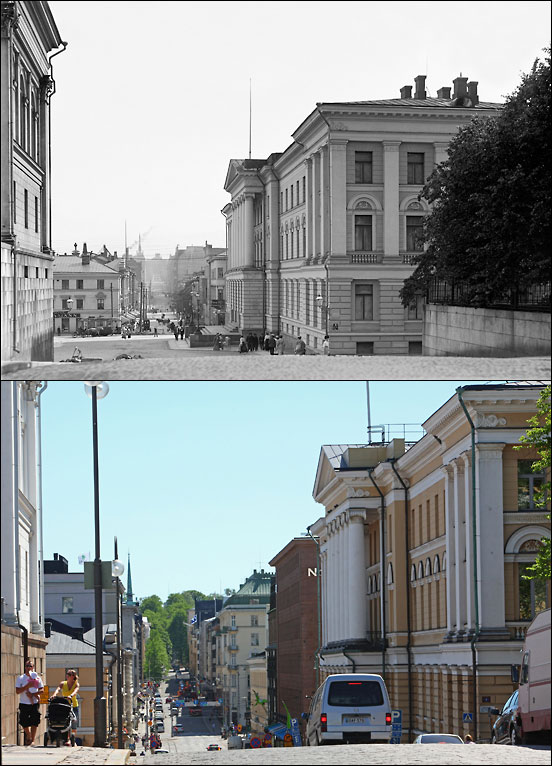 Top: We’re on Unioninkatu on the west side of the Lutheran Cathedral, looking south. Stockmann was located on Senate Square (part of its sign is visible, lower left). Bottom: A century later people still enjoy strolling through this neighbourhood. Photos by I.K. Inha and Tim Bird 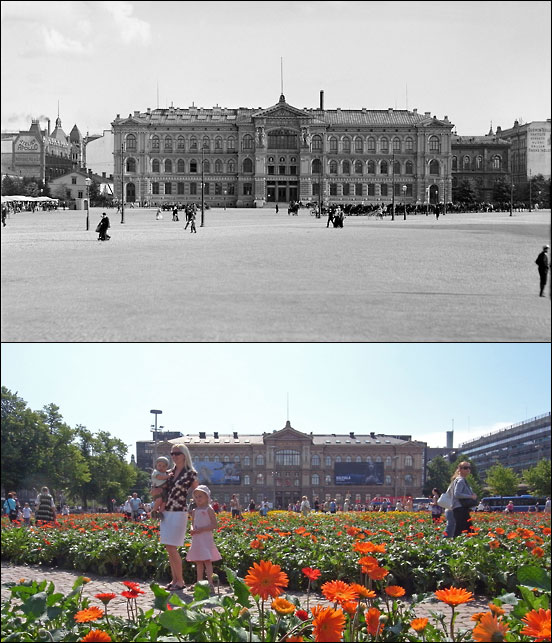 Top: The Ateneum Art Museum stands at one end of Railway Square. Completed in 1887 after large public investments, it used to bear the nickname Million Palace. Bottom: In July 2009, artist Kaisa Salmi created a sea of colour on the square with Eden VI, a labyrinth made out of 100,000 gerbera plants. The flowers were given away free to the citizens of Helsinki a week later. Photos by I.K. Inha and Tim Bird