Saint Lucia celebrations light up the winter and warm people’s hearts every year on December 13.

Light in the dark of winter: The Lucia procession in Helsinki Cathedral precedes a Lucia parade through the city.

Mid-December is dark and cold in Finland – there are no two ways about it. As the country takes its annual plunge into winter, many Finns find solace in a saint.

White-clad Saint Lucia, borrowed from Catholic and Orthodox churches, wears a striking crown of tall white candles and sings ancient songs to urge people out of their winter doldrums. The main event takes place on December 13.

It’s the closest thing Finland has to celebrating royalty. This special woman, symbolic of the fourth-century Italian martyr Lucia, is put on a pedestal. She is literally crowned – and then given the duty of offering an abundance of joy, music and golden light to everyone who needs it.

Thousands of girls across the country also don homemade versions of Lucia’s trademark white dress and crown of candles (kids use safe, battery-powered “candles” nowadays). Then they sing for family or schoolmates in an annual tradition that has continued to grow over the years.

Tens of thousands of fans

The honour of being chosen as the one who “gets to be Lucia this year” does not go unnoticed by most girls, many of whom dream of someday being the real Lucia. Hundreds of musically gifted girls in their late teens and early twenties vie for the prestigious title. 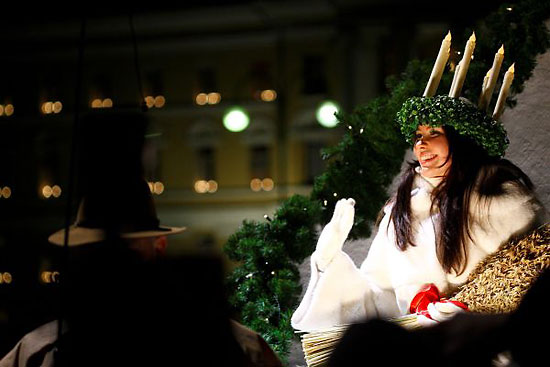 Waving to the crowd: Every year about 30,000 people attend the Lucia crowning ceremony and parade in downtown Helsinki. Photo: Mikko Käkelä/Folkhälsan

Every autumn ten finalists are selected by a jury and proceed to the next round, the winner of which is decided by popular vote. On December 13, Lucia is crowned at Helsinki Cathedral and parades through the city centre as tens of thousands of bundled-up onlookers cheer and wave.

For more than 60 years, Lucia festivities have been organised by nongovernmental social welfare organisation Folkhälsan and Swedish-language daily Hufvudstadsbladet.

The chief Lucia organiser, Folkhälsan’s Margaretha Wildtgrube, says Lucia has come to mean charity, both literal and aesthetic. “Lucia has many roles,” she explains, “building on centuries of Nordic tradition. She has the role of being the ‘Swedish-speaking Finns’ Lucia,’ and is obligated to offer a beautiful, ethereal experience.”

“But the Lucia brand also has a social responsibility,” Wildtgrube notes. Lucia also raises money to help children who have experienced violence at home.

For many weeks after December 13, Lucia continues to spread her hope and cheer, visiting hospitals, orphanages, daycare centres and nursing homes at the darkest time of the year in Finland.

More than a brand name

But isn’t this the 21st century? Why does an old-fashioned thing like this only get more popular as the gears of modern life churn along? Hasn’t Lucia changed since her debut? “At her core, Lucia hasn’t changed at all: the white dress, the red belt, the crown of real candles in her hair,” Wildtgrube says.

“The demands about what qualities Lucia should possess have indeed changed. In the past Lucia was perhaps the ‘quiet girl,’ the one who didn’t necessarily outshine everyone else in the room. But today we want to see a Lucia who can handle the media and feels comfortable in the public eye and everything that goes with that.”

The value of Lucia is not just a brand name, but a personal feeling, according to Wildtgrube.

“Lucia hasn’t been exploited by designers and stylists yet, and is genuinely human in her simplicity,” she says. “It’s the ‘small format’ that has made Lucia such a big deal.” 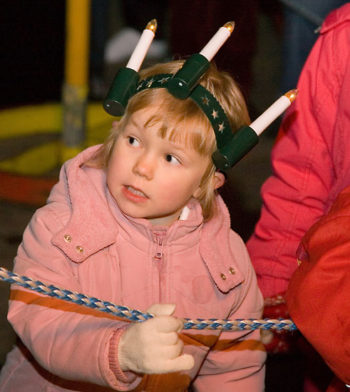 Candles, music and mood: This little Lucia is eagerly waiting to catch a glimpse of her official counterpart. Photo: Hannes Viktorzon/Folkhälsan

By Mark B. Odom