A bridge leads over to Santa’s cabin at Santa's Resort, a recently established destination in Finnish Lapland.

He looks like Santa’s brother, so it’s appropriate that Jussi Eiramo is completing a new tourist project in Finnish Lapland that will charm the world’s children – and generate some economic magic.

“In this hectic and harsh world, we need fairy tales. In some of us it may be deep down, in others it’s not as deep, but we all have the Christmas spirit.” These may sound like the words of an innocent, but when they’re spoken by a jovial, white-bearded gentleman in the middle of Lapland they seem to carry more weight.

The white-bearded gentleman in question is not who you think it is, although you suspect that Father Christmas and Lapland entrepreneur Jussi Eiramo might well be twins. Eiramo comes across as part Santa-in-overalls, part veteran hippy and part shrewd businessman as he puts the finishing touches on his new Santa’s Resort, just a 20-minute drive from Ivalo Airport in northern Lapland.

The new resort realises Jussi’s latest business dream, adding to the nearby Kakslauttanen Hotel and Igloo complex. At Kakslauttanen you can choose between sumptuously furnished log cabins and snow igloos for your Arctic accommodation, or lie back in luxuriously heated glass igloos with a clear view of the sparkling starlit heavens or awe-inspiring Northern Lights.

In search of snow and reindeer 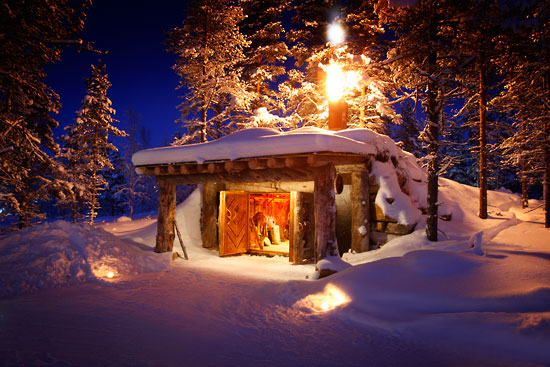 The fruit of a multimillion-euro investment, Santa’s Resort is not the first business attempt in Finnish Lapland based on the Christmas legend. For decades, dozens of charter flights packed with families in search of snow and reindeer have been packing the runway at Rovaniemi Airport, right on the Arctic Circle.

The shops, tours and services at the well-established Santa Claus Village and underground Santa Park in Rovaniemi are important sources of local employment. Kakslauttanen may be 200 kilometres further north, but Eiramo envisions similar year-round popularity for his venture.

“I don’t think we will be competing with the Rovaniemi Santa Claus Village,” says Jari Virtanen, who heads Kakslauttanen’s marketing. “I think we’re going to complement each other.”

Eiramo’s vision took more than a decade to become reality, and he hopes planning and building bureaucracy for any similar future projects might be expedited for the sake of the local economy. “The project has provided employment for about 30 people, from builders and contractors to artists and designers,” says Virtanen. “We used local labour as much as possible, so the financial gains remain in this area.

“When it’s fully open the resort will offer work to up to 15 people, and more during the high season.” This figure does not include the jobs generated for bus drivers, tour guides and other tourist service providers. Onsite accommodation is not included in the resort plans – not yet – but the cabins and igloos of Kakslauttanen and the hotels of the Saariselkä holiday village are handily placed. 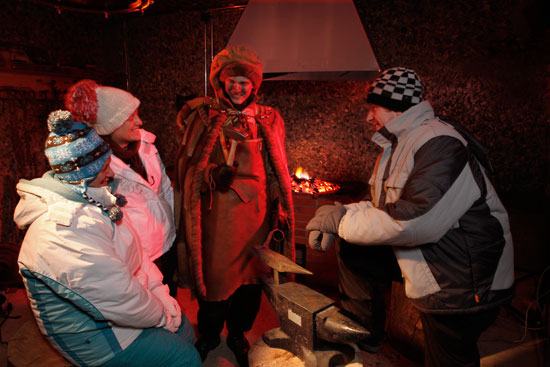 “The Celebration House at the heart of the resort offers a long-awaited and sufficiently large space where it’s possible to arrange big meetings and conferences as well as other events, such as concerts,” Eiramo says. “There was a great need for this kind of space in this part of Lapland.”

“We strongly believe that the project will benefit Ivalo Airport, as well as the rest of the area,” says Virtanen. “It looks like there are tour operators new to our area who are planning to start charter flights to Ivalo, and there could be a wider effect on neighbouring areas of Norway and Russia.”

Eiramo concludes on a charmingly, but convincingly authentic, idealistic note, offering up the resort as a neutral venue at which to iron out the difficult issues of the day:

“The Finnish government wants to make Finland a superpower in brokering world peace. Now Father Christmas can provide a calm and neutral place for this purpose, in the Celebration House in the middle of the peaceful Lapland natural environment. This is where you are going to find the real spirit that’s going to help you solve the conflicts of the world!”