Santa, shown here with one of his reindeer, is preparing for the annual global delivery run, which starts and ends at his home base in the Finnish far north.

Santa and Mrs Claus, along with the elves and reindeer who play central roles in gift production and delivery, live in the far north of Finland, in Finnish Lapland.

In a bulletin released by the Ministry for Foreign Affairs of Finland, Santa confirms that a pandemic can’t keep him from doing the job that he looks forward to all year. [Full disclosure: ThisisFINLAND is produced at the Ministry.]

The previous Christmas went according to plan, and so will the current Christmas. “Under specially negotiated multilateral agreements,” says the article, “Santa and his reindeer-drawn sleigh are granted exemption from travel restrictions in order to ensure that they are able to deliver their presents.”

While he and his crew will not have to show their vaccination certificates, Santa notes that he, Mrs Claus and the elves are all fully vaccinated. “In general, I place great value on being nice, so of course I follow all the regulations and recommendations,” Santa told the Ministry for Foreign Affairs.

When ThisisFINLAND contacted Santa to confirm this information, he added that, just as in previous years, he “will not have a diplomatic passport, a travel visa or even a reindeer parking permit” when he makes his rounds. 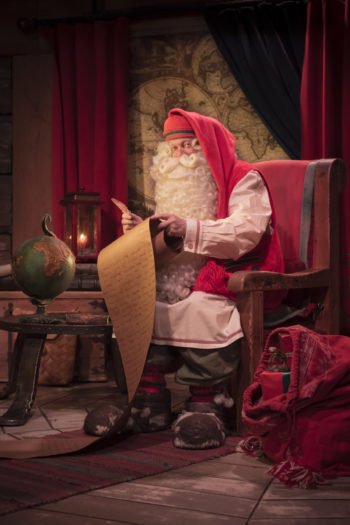 Santa Claus makes and double-checks his list before leaving to distribute presents around the world.Photo: Santa Claus Office

“Despite everything, preparations for Christmas have gone extremely well,” Santa said. Asked about health regulations, he responded, “When you are the world’s guardian of goodness and kindness, it is only natural to respect and follow all public health recommendations and social distancing rules.” He told us that he also follows “the proper use of reindeer back scratchers.”

The Ministry bulletin notes that Santa “listens to children from all over the world, whether he meets them in person or reads the letters they send to Finnish Lapland, where his workshop, post office and home are located. Santa is sensitive to children’s concerns and can see things from their perspective.”

That article quotes his recent public appearance in the Finnish city of Rovaniemi, on the Arctic Circle, where he told listeners, “We have been living in this very extraordinary time for two years,” and expressed concerns about the pandemic’s effect on kids:

“I have heard some worrying news about the wellbeing and coping of children and young people around the globe. As the Christmastime festivities approach, it is time to turn these worries into plenty of goodwill. I have a great wish, a huge desire for us all to try very hard to make this Christmas happy and unforgettable for children.”

Meet one of Santa’s elves

Our reporter visits Finnish Lapland to catch up with Crackers, one of Santa’s elves, for a rare, exclusive interview.

Try our Christmas quiz to see how much you know about Finnish Christmas traditions and foods – and to learn their names in Finnish.