How Finnish robots could save the world

Keep your eye on the ball: This prototype shows off ZenRobotics technology useful in sorting waste.

A colossal sign atop a building near Helsinki Central Railway Station marks the headquarters of ZenRobotics, an award-winning startup company that has steadily gathered media momentum since its appearance in 2007. Its product is a highly intelligent robot whose “brain” is inspired by that of a human, making the waste recycling process more efficient than was ever thought possible.

“We all know the world is drowning in waste and resources are running out,” says Jufo Peltomaa, marketing director at ZenRobotics. “Why isn’t the same amount of passion and expertise expended on the end-of-life logistics of a product as is consumed in making it? Why is the products’ life cycle linear instead of circular? Factories spew out endless amounts of new things every day, of which 98 percent ends up in landfills within six months of purchase. Most materials – such as metal – could be redirected back to production.”

Peltomaa believes that after five years of vigorous development and piloting of ZenRobotics’ groundbreaking product, world domination of robots could finally be around the corner. “Robots are no longer the future – they are here,” he says.

With an increasing amount of big names jumping onto the bandwagon – the latest addition is Kone Corporation’s customer experience director Juho Malmberg – and with the first major deals being signed, Peltomaa might just be right. 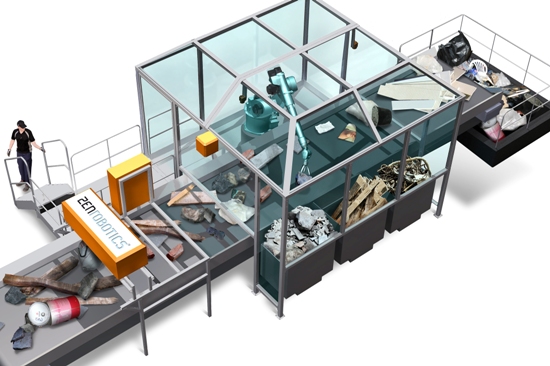 As the waste rolls by on a conveyor belt, the robot moves different kinds of recyclables into various bins.Illustration: ZenRobotics

The ZenRobotics website, marketing and media releases are far from ordinary – they are tongue-in-cheek creations. They may refer to the company’s experts as a “mad chorus of world domination doctors” or quote the CEO as commenting, “Mwbrahahahaaaaa!” (a representation of maniacal laughter).

All that could inspire mockery, were it not for the fact that the ZenRobotics team of experts, all at the top of their fields of research, are developing a seriously useful product that has yet to find a rival.

“When we started ZenRobotics, we applied some practical experience from Hybrid Graphics Ltd, the previous successful technology company Tuomas [Lukka, present director of research] and I were in previously,” says Peltomaa. “We consulted a couple of hundred customers in order to find out where robotics could best help them. From micro-assembly to shipyards, it soon became clear that they all had the same problem: Dealing with objects that a robot is unable to grasp or recognise due to their complex and ever-changing 3D shape.”

“The idea to concentrate on recycling had its origins in this realisation, for various reasons. For one, it’s easier to get funding for ecological projects, as they are considered increasingly important. Recycling also forms a current megatrend, as it attracts media attention and all companies want to develop their green strategies. Combining recycling with robotics – another megatrend on the rise – seemed like a perfect match. And personally, we love both.”

ZenRobotics Recycler represents the brainchild product of extensive research, whose foundation is based on principal scientist Harri Valpola’s groundbreaking 20-year study of neurobiology and machine learning.

The product is currently designed for construction and demolition waste only, but plans for the future include all kinds of solid waste, including commercial metal waste and hazardous waste. As recycling requires separating raw materials from waste, the task is currently too complex for conventional robots and thus mostly done by humans, often manually and in very dangerous conditions. 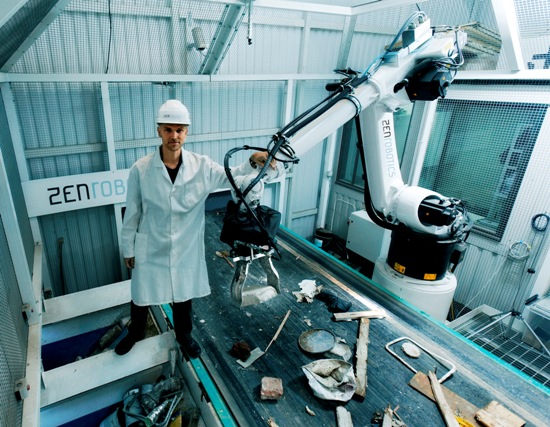 Getting a grasp on the future: ZenRobotics Recycler can discern recyclable objects and separate them from other rubbish.Photo: ZenRobotics

Whereas conventional industrial robots usually have very few sensors and work in simple, predefined conditions with uniform objects of the same material, ZenRobotics Recycler’s “bioinspired” control system uses numerous sensor inputs. This means it functions similarly to the human brain, with a trial-and-error capability to learn from its mistakes and improve at its task.

The ZenRobotics Brain will, in the long run, form a coherent overview of the situation and reclaim or remove materials from the waste stream as needed. This is unheard of in the robotics world, although we may think otherwise after having watched too many sci-fi films. Peltomaa emphasises that there has never been such a diverse and accurate analysis of waste before. “We are truly revolutionary in this field.”

You’re either with us or against the world

Although a ZenRobotics Recycler robot will cost you an estimated one million euros, the market is there and so are the customers. After running pilot projects with Sita Finland (a subsidiary of Sita Environnement, a world-leading water and waste management company), ZenRobotics is starting to sign deals with customers around the world.

If all goes according to plan, we may see a cleaner, better world soon, a world where robots do the most tedious, hazardous jobs for free without complaint and work round the clock.

Perhaps that will help us humans concentrate on using less, thinking about what we buy and enjoying what we have.

A planet is drowning in waste and dramatic music, but there is hope for the future.