Finland reaches for the solar switch

FinSolar is spotlighting solar power. If you thought Finland wasn’t ideal for solar panels, you have to read this.

Panel pose: Karoliina Auvinen of Aalto University School of Business, leader of the FinSolar Project, believes Finland will need a broad palette of renewable energy in the future.

A project aimed at changing attitudes about solar power – as well as its financing and legislation – involves Aalto University, the city of Helsinki and more than 40 Finnish companies and other partners.

A few panels installed on summer cottages to catch the midnight sun – that used to be the extent of Finnish solar power. Otherwise it has not traditionally been taken very seriously in Finland. Too expensive, with too short a season, said the sceptics.

Now the picture is changing dramatically. The price of solar panels has plunged by 80 percent since 2008, while their efficiency has risen. New panels work even on dim, rainy days. Germany and Denmark have proved that solar – in tandem with wind – can be a major player, even in northern Europe. In 2014 Germany generated more than 6 percent of its electricity from solar.

Finland has several aces up its sleeve: solar panels produce more efficiently at cool temperatures and in clean, dustless surroundings. Meanwhile, cutting-edge solar innovation is under way at dozens of export companies and places such as Aalto University, Lappeenranta University and VTT Technical Centre.

The FinSolar Project involves some 50 partners, including six cities, top retailer S-Group and Ruukki Construction. The venture, which runs through the end of 2015, is drawing up plans for measures to be taken nationally by the end of the decade. The main aims: expanding jobs, exports and self-sufficiency.

“Our goal is to give a real push in developing business in this sector,” says the project’s director, professor Raimo Lovio. “We need a coordinated national effort involving all areas of society: companies, authorities, political decision-makers and citizens.”

The country is committed to the EU goal of 20 percent renewable energy by 2020. Researchers here are busy developing biofuels from forest industry by-products. Wind power is being expanded, though the country is still catching up to its Nordic neighbours in this area. 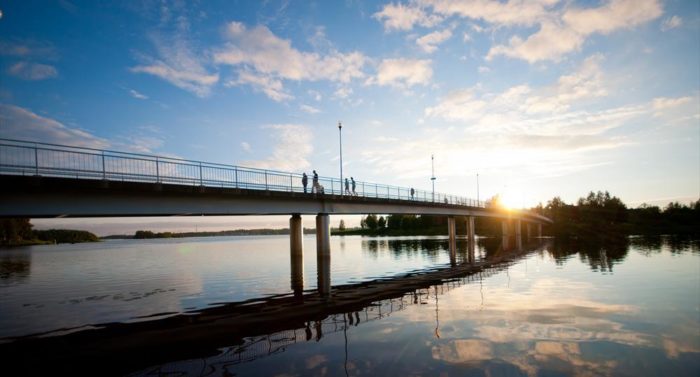 As this night photo of a bridge in Oulu shows, the sun doesn’t set in northern Finland for several months during the summer, making it a good spot for solar powerPhoto: Pekka Kallasaari/Visit Oulu

“In the future Finland will need all kinds of renewable energy, a palette,” says FinSolar’s project leader, Karoliina Auvinen of Aalto University School of Business. “Since 2014, there’s clear proof that solar has hit the price level where it’s profitable in Finland, under certain conditions. It’s feasible here from March to October. It goes hand-in-hand with wind, which produces better in the winter.”

On a tour of Aalto University’s Energy Garage, Auvinen notes that it’s possible to generate the same amount of solar energy here as in Germany.

“We get the same amount of sun annually – it’s just concentrated in the summer. And photovoltaic panels are most efficient when they’re cold. So when you get sunny, cold days, you get the best production ever.”

You might think solar would be less viable up north. Yet the northern coastal city of Oulu has more bright days – and hence better solar yield – than even south-central Finland. Players continue to one-up each other as the field expands, creating a sort of race to put up panels.

The country’s biggest solar plant, with a capacity of 420 kilowatts, reaching completion in Oulu in June 2015, surpasses the previous number-one installation, switched on in March 2015 by Helsinki’s electric company, Helen. It covers a large roof in the Suvilahti neighbourhood and has a capacity of 340 kilowatts, sufficient to power 137 apartments. It brought the national total to ten megawatts – still modest compared to neighbouring Sweden, which installed more than 36 megawatts last year alone.

Helen is inviting customers to “sponsor” individual panels – a system that saw great success in Suvilahti – in order to construct another site in the Kivikko district, eclipsing its predecessor with more than twice the capacity. 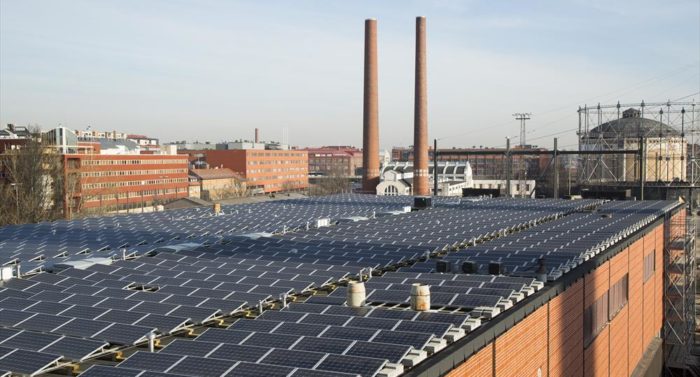 FinSolar leaders are lobbying for legislative reform to help Finland catch up. For instance, it is one of the few EU states that do not offer subsidies for private households to invest in solar. And VAT on panels is well above average.

In winter 2015, then Prime Minister Alexander Stubb received a solar petition with 22,000 signatures; it enumerated demands that included tax breaks for homeowners. Nineteen organisations backed the petition, including the Finnish Environment Institute (known by its Finnish abbreviation, SYKE).

According to SYKE researcher Hanna-Liisa Kangas, “the price of solar panels has dropped dramatically, so the solar energy market in Finland could be kick-started with very modest costs and policy changes.”

Signs of change exist. In March 2015, Parliament expanded a tax exemption to encourage businesses and municipalities to install solar plants of up to 900 kilowatts.

Around 50 Finnish companies have exports in the solar sector, including Valoe, Green Energy Finland, Naps, Nocart and Savosolar. With solar set to become the world’s biggest source of electricity by 2050, Lovio sees a vast potential for exports.

“Internationally,” he says, “such decentralised energy systems are a quickly growing field where there’s much potential for Finnish know-how.”