They move with self-assurance on a stage at one of Helsinki’s most prestigious indie music festivals: happy, jumping, laughing and playing their guitars as if they were playing at an American high school on their own graduation day. Their wild, festive atmosphere doesn’t quite fit the general tone of Finnish music, which is sometimes characterised by heavy rhythms and a certain air of nostalgia.

“Well, if you live in Finland, it’s practically impossible to avoid a melancholy touch in the lyrics,” vocalist Johannes Leppänen tells us from behind his sunglasses while enjoying a well-deserved post-concert beverage backstage. At 22 years of age, the carefree air that he exudes is at the same time a very confident one for someone that considers it a privilege just to be on stage: “A few years ago I didn’t even have the money to come to the festival. I use to tell my friends that one day we will come here to play. And look! This year it came true!”

A future of films 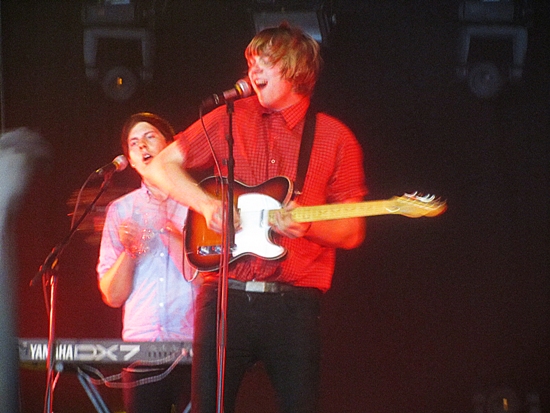 They give it everything they’ve got at Flow Festival in August 2011.Photo: Antonio Díaz

In spite of having to play at an early hour, in spite of the organisers opening the doors late and in spite of a guitar not working, French Films manages to make the audience dance and jump as if possessed during a half an hour of scintillating guitar riffs, youthful energy and cool vibes.

This band has been coming on strong, and with good reason. It is considered by the Finnish trade press to be the most promising band on the scene, a future sales-chart topper. Its members Johannes, Joni, Mikael, Santtu and Antti have already achieved something beyond the reach of many new bands: They are well known only a year after publishing their first EP, Golden Sea.

“The truth is that internet promotion has helped us a lot,” says Johannes. “Ten years ago this would most probably have been impossible. Now Facebook, MySpace and all the blogs help us. Sometimes fans send us messages commenting that they loved some French movie or other. I am no expert in that field – the name of our band came from a conversation with Joni, our guitarist. But as long as they are fans, anything goes!”

Japan on the horizon 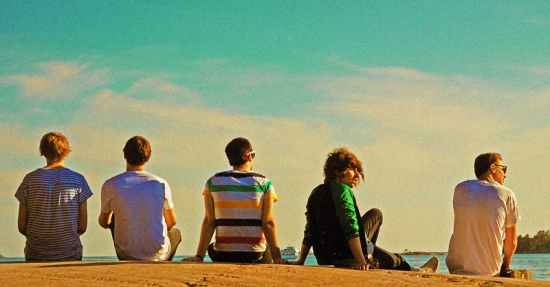 Looking forward to the future: French Films performs in the Land of the Rising Sun in late 2011.Photo: Flow Festival

For the time being the band is busy showing the world that French Films refers to more than Godard and Truffaut. The band’s first album, Imaginary Future, appeared in September 2011. They will continue touring Europe and will visit Japan for the first time at the end of the year:

“I’m excited about our trip to Japan,” says Johannes enthusiastically. “It’s an incredible place and I’ve never been there. It’s fantastic that our music gives us the opportunity to visit places like that.”

Even though French Films’ music invites you to relax and be transported by the party atmosphere, these Finns have their feet firmly on the ground: “We’d like to thank the public for everything,” Johannes tells the audience. “We hope you enjoy the concert, buy the new album and keep away from fascism because it’s never a good thing!” He shouts out his farewell message with a mischievous smile.