The dinosaurs in Finnish band Hevisaurus feed fun, educational heavy metal to the under-ten masses and their parents.

In Finland, famous for its heavy metal music, the kiddie music mix also includes metal, thanks to the reptiles in a group called Hevisaurus. The concept, both fun and educational, is even becoming an export business.

Children around the world generally like sweet, fun, bubblegum-flavoured music. Hevisaurus, however, takes a different stance: The quintet’s show unites heavy metal and dinosaurs. Decked out in full-length dinosaur costumes, the band plugs into amps that reach a child-friendly 85 decibels onstage.

Aimed at youngsters between two and nine years old, the band played their first gig in September 2009. The same year also saw their debut album Jurahevin kuninkaat (Kings of Jurassic Metal) comfortably reach number five on the Finnish Album Chart. With songs about chewing bubblegum, drinking milk and being a part of the ’Saurus army, their popularity has gone from strength to strength. In 2012, Kadonneen lohikäärmeen arvoitus (The Riddle of the Lost Dragon) hit the top spot on the local charts.

Despite their raucous stage show, dinosaurs are – surprisingly – much shier than you might think. The reptilian band directs this curious journalist to their human spokesperson, Jan Streng.

“Hevisaurus is about fun characters, nice stories, music, colours and lights,” Streng explains. “The band is suitably hard, but not scary.”

Incorporating both entertainment and education, the band fulfils many of the purposes of children’s music.

“The lyrics express themes that range from bullying to traffic behaviour, and send a message about how to behave correctly. However, while education is important, it is not the most important thing”

Given the presence of double kick drumming and howling guitar solos in their songs, it’s safe to say that lullabies are probably not one of the functions served by the Hevisaurus’s music. One thing’s for sure: They seek to get everyone in the household tapping their toes, if not banging their heads.

“Adults are undeniably very involved in our concerts,” Streng says. “This is something for the whole family.”

At home with metal 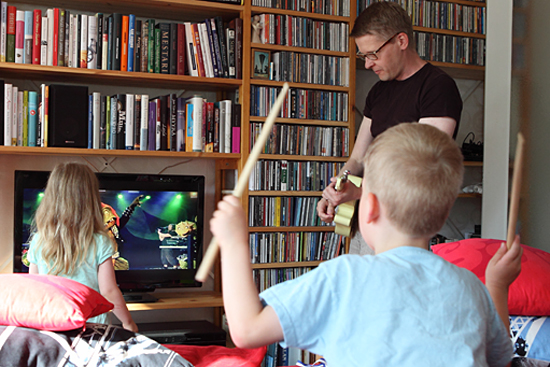 Proud that they’re into heavy music: Petri and the kids rock out in the living room to the tune of reptilian metal.Photo: Anna O’Sullivan

The TV is on at the home of Petri Niemi, with a DVD screening a live performance of the dino-metal musicians as they stomp their way through the popular single Räyh.

“My favourite band member is Komppi Momppi,” says Niemi’s six-year-old son Joel, before launching into an enthusiastic beat on a makeshift drum kit of pillows scattered about on the couch. Dad strums along on a ukulele, keenly displaying his lifelong love of heavy metal.

“Hevisaurus is well-played heavy music,” Niemi says a moment later as he catches his breath. “It’s all about letting kids go wild in a safe way.”

Joel’s passion for music has also expanded beyond the living room jamming space – he and his friends have formed their own band at daycare, where they play Hevisaurus tunes, among others.

“He listens to other music also, not just the heavy stuff,” Niemi emphasises. “But yeah, as a dad, I’m proud that he’s into heavy music.” 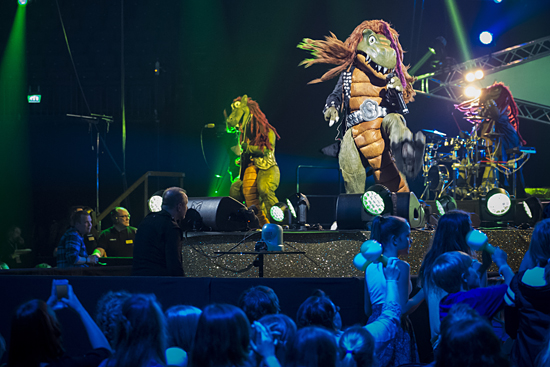 Green is the new black: Hevisaurus is becoming an export concept, reaching all the way to Argentina. Photo courtesy of Hevisaurus

The extent of the band’s success has also led to the concept being exported overseas.

In Argentina, the lyrics are belted out in Spanish at Heavysaurios shows. The other factor that differentiates the Argentinean shows from the Finnish gigs is that grown-ups are present in still greater numbers in the audience. The popularity of metal music in the South American country is such that there are many adults who attend the concerts even without children.

With plans to bring the heavy metal dinosaurs to other foreign markets in future, it appears that they are not likely to become extinct anytime soon.