While the name Alvar Aalto is synonymous worldwide with innovative architecture, it is also closely associated with exceptional furniture design. Chief among these is the quintessential functionalism of his Stool 60.

Stool 60, designed by Alvar Aalto, has sold at a rate of a million per decade since it was created in 1933.

While the name Alvar Aalto is synonymous worldwide with innovative architecture, it is also closely associated with exceptional furniture design. Chief among these is the quintessential functionalism of his Stool 60.

With sales of around eight million units over the years, Alvar Aalto’s Stool 60 celebrated its 80th anniversary in 2013.

Aalto helped pioneer the groundbreaking process of bending wood, and applied it in creating the legs of his three-legged stool. The design allowed the seats to be stacked easily on top of one another, taking up far less storage space. Utilising birch wood, one of the most common broad-leafed trees in Finland, first saw cuts were made into the L-leg planks of wood, before a process that bent them to a 90-degree angle using heat and steam.

A piece of history 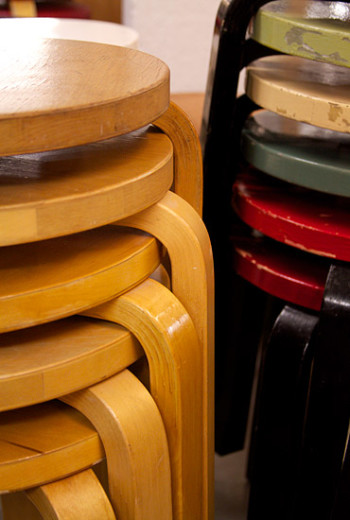 Stackable stools, and enduring, too: When a Stool 60 outlives its coat of paint, the wear and tear just seem to add to its charm.Photo: Leena Karppinen

Stool 60 was officially unveiled to an enthusiastic public in London at a Finnish furniture review in November 1933.

“Back then it was a surprise to the English audience and press that such a good design came from a little, unknown corner of Europe called Finland,” explains Mari Murtoniemi, educational curator at the Alvar Aalto Museum. “Aalto has been the flagship of Finnish design ever since.”

Situated in his former hometown of Jyväskylä, central Finland, the museum marked the stool’s 80th birthday with a special exhibition to tell its story.

“Aalto was one of the designers who created the image of quality and functionality that Finnish design is still appreciated for today,” Murtoniemi says. “He was a gate opener.”

Aalto’s designs were created for all to enjoy, and many of them appear in Finnish homes. Helping facilitate this is Artek, the furniture company that Aalto established in 1935 with his wife Aino, visual arts promoter Maire Gullichsen and art historian Nils-Gustav Hahl. Also commemorating its 80th anniversary, the company introduced a series of special edition Stool 60s produced by various well-known architects and designers, and brought back a range with vintage coloured tops. 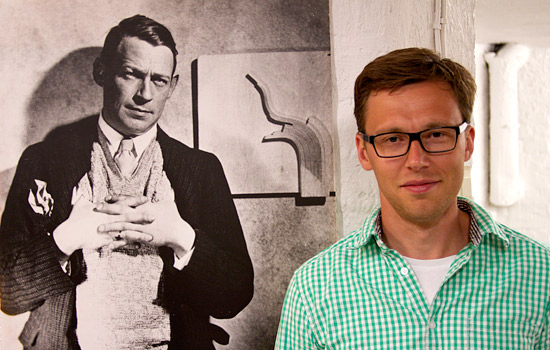 Timo Penttilä of Artek 2nd Cycle, which deals in recycled and vintage Artek furniture, faces the camera along with a portrait of designer and architect Alvar Aalto.Photo: Leena Karppinen

All things considered, 80 years is a long time in the design world. Just why has this simple stool endured?

“It was just genius,” says Timo Penttilä, from Artek 2nd Cycle, a branch that deals in recycled and vintage Artek furniture. “It was revolutionary back then and it has stood the test of time. There are many words to describe it: simple, beautiful, functional.”

Seeking to preserve the sustainable design of Artek furniture, the 2nd Cycle retail and exhibition space in Helsinki collects pieces from flea markets, schools, nursing homes and garages. While the company offers to restore each item to its original condition, each piece of furniture’s unique condition is greatly respected.

“We leave most of the items as we find them,” Penttilä says. “Each piece develops its own character over the years. Personally, I like stools whose paint has worn off from heavy use.”

And, given their ease of storage, Penttilä isn’t alone in having numerous Stool 60s stacked away at home.

“If we have a party at home, we have a seat for everybody,” he smiles. “Some people who work here buy one stool every year. My colleague Antti has around 15. Or maybe he has more, but he isn’t telling how many.”