Sauna is a huge deal for the Finns, and a favourite topic. An American in Finland recounts sauna highlights and stories.

The old Finnish proverb “First build the sauna, then the house” shows how seriously Finns take this national institution. As our American reporter knows, it’s also a topic that they love to talk about.

Finland, a country whose sauna traditions go back a couple thousand years, boasts a range of studies, seminars, magazines and clubs devoted to the subject of saunas. In the old days, the sauna was a place to get clean, take care of personal hygiene, cook, store things, give birth and, most importantly, escape the cold of winter for a while.

Nowadays there are two million saunas, located in houses, apartment buildings, companies, government offices, swimming pools, summer cottages, yachts and bars. There is one in the Parliament building, one at the bottom of Pyhäsalmi Mine (the world’s deepest sauna) and one that holds the honour of being the world’s largest (Jätkänkämppä in Kuopio). Mobile saunas even exist – various versions have been built into buses, trailers, tents, telephone booths, farm machinery and even bicycles, and a Mobile Sauna Festival is held in the western Finnish town of Teuva. 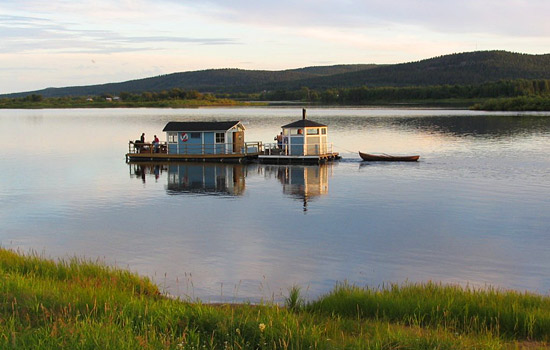 When even a waterside location isn’t close enough, you need a floating sauna like this one on the Tornio River on the border between northern Finland and Sweden.Photo: TimoOK/flickr, cc by-nc-nd 2.0

Upon arrival in Finland, I immediately started hearing praise about the sauna. It’s the supreme health treatment, Finns told me. My first experience was in Tampere at a public swimming pool. As instructed, I alternated between sitting in the sauna and taking a refreshing swim in the pool, not to mention hitting myself lightly with a bouquet of birch branches in the sauna to improve circulation. Afterwards, I felt marvellous, refreshed and invigorated. The next morning I woke up with a terrible cold.

The cold soon went away, and my appreciation of the sauna grew. I was delighted to find that my apartment building had a sauna. A neighbour explained that it had a rare, natural-gas stove. First you heated the stones for two hours, then turned it off and let the heat spread for 30 minutes. The result: heavenly warmth. Technically, this was probably the best sauna I’ve ever had. Unfortunately, the stove made a mild explosive sound when you lit it, so they replaced it with an electric one. Goodbye, perfect sauna.

Once, while having a winter sauna in the countryside with friends, they suggested that I try snow rolling, which they described as stimulating and pleasant. Soft and powdery, the snow looked almost cosy. Nevertheless, when it came into contact with my body, I felt like I was rolling naked through a cactus garden.

“That was terrific,” I lied. “Good,” my friends said, “now you’re ready to try the avanto.” Finns wax poetic about the wonders of avanto-uinti, swimming in a hole in the ice of a frozen lake or ocean, often in combination with a visit to the sauna.

Saunas of all sorts 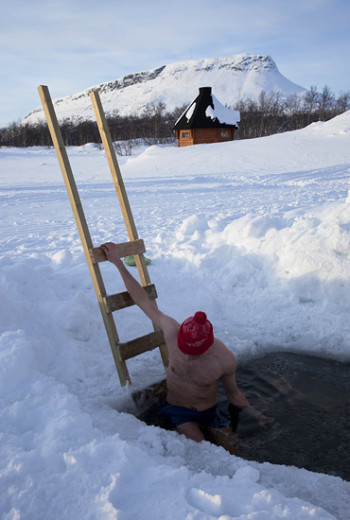 Ice swimming can be enjoyed in combination with a sauna. This bather is testing the waters of Kilpisjärvi, a lake at the far northwestern tip of Finland, where it touches Norway and Sweden.Photo: Visit Finland

Then there was the time I was staying at a quaint old mansion hotel in eastern Finland in early autumn. In the daytime, I hiked around the captivating forests, and in the evening I feasted on a sumptuous dinner. I was the only guest at the hotel and decided to have a lakeside sauna at midnight. After getting good and sweaty, I dove into the lake.

The water temperature was surprisingly agreeable, and it was easy to leisurely float on the surface. But it was so dark that I could hardly see anything. My mind began to race. What if I hit my head on the pier? Or if my feet got stuck in the muddy bottom? And aren’t bears excellent swimmers?

“You’re back so soon?” the manager remarked. “Yes,” I said, “I thought I’d get some sleep. Big day tomorrow.”

Over the years, the Finns have given me the opportunity to try smoke saunas with heat soft as silk, a roof-top sauna with spectacular views and a sauna that was 110 degrees Celsius (230 Fahrenheit). I was surprised that I survived the latter – a more typical temperature would be closer to 80 degrees Celsius (176 Fahrenheit), which is still pretty hot.

I’ve been to gigantic saunas, one-person saunas and after-sports saunas. I’ve been to wild saunas with boisterous conversations and ones where I could relax in solitude. In gathering all these interesting experiences, I’ve acquired many great memories. Most importantly, I now have an excellent topic for eloquent conversations with the Finns.

His Royal Highness The Duke of Cambridge, also known as Prince William, got an unusual gift during his official visit to Finland: two handcrafted hobbyhorses. They’re more than mere toys.