Every move you make leaves digital footprints behind. Your browsing history and social media posts create data about you. Technology provides valuable services to us, but it comes at a cost – not just monetary, but also with our data. However, there are steps a person can take today to stay educated and help secure their data.

Every move you make leaves digital footprints behind. Your browsing history and social media posts create data about you, but much of this is completely out of your knowledge or control.

The MyData conference is one piece of a new movement to give you control over your data. The fourth annual edition of the event takes place in Helsinki from September 25 to 27, 2019.

“MyData is a technical, business and legal movement for people to own and control their own data,” explains Molly Schwartz, New York-based technology journalist and MyData conference host. “There are clear problems and abuse on a massive scale when it comes to personal data.”

The EU has rules such as the General Data Protection Regulation (GDPR) for individual private data, but most data generated worldwide has neither a technical nor an ethical standard for how it is used. MyData hopes to solve this challenge.

MyData is not an organisation, but a term for many projects and initiatives for human-centric data management. It is closely related to the Open Knowledge movement and believes in open standards. There are local hubs on every continent except Antarctica, but the movement has a particularly strong tie to Finland. 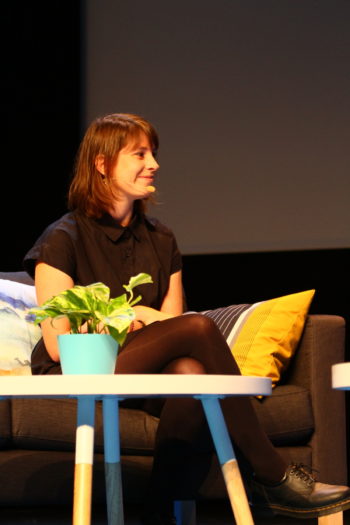 “MyData is a technical, business and legal movement for people to own and control their own data,” says Molly Schwartz, New York-based technology journalist and MyData conference host.Photo: Juha Auvinen

“I came to Finland in as a Fulbright grantee at the Aalto University Media Lab,” Schwartz says. “In 2015, I attended a talk about digital activism and someone mentioned the MyData concept. This was in the early stages of GDPR and there was less criticism of Big Tech, so I was interested to hear about potential solutions.”

The movement in Finland received a boost with a 2014 study commissioned by the Ministry of Transport and Communications. Activity is always ongoing, but the major event is the annual conference, which has taken place in Helsinki, with some activities across the water in nearby Tallinn, Estonia. Topics have ranged from technical aspects of data portability to personal data marketplaces.

“Finland is a good place for this movement to develop,” Schwartz says. “Finland has the European perspective of consumer protection. Finland is solutions-oriented and has excellent computer science engineers. Finland is also a small country, so you can run a pilot which covers many different sectors of society.”

What do we want from technology?

Minna Saariketo is a doctoral researcher in media studies at Tampere University. Her study on how people use and perceive digital technology helped spur her interest in MyData.

“Giants like Google and Facebook have such a strong hold on our daily life,” she says. “People generally accept the idea that they use these services and lose their data. MyData is an alternative, a re-imagining of the system.”

Most participants at the MyData conferences have been business, legal or technical experts in the field. Saariketo was able to show them how the general public uses technology and thinks about data.

“MyData engages with governments and developers, but it must also reach out to regular people,” she says. “Networked media technology is a self-evident part of our lives and routines, from the instant we wake up to when we go to sleep. A major goal of my work is to provide insights into how our system can be otherwise. We want people to step back and think of what they want from technology.”

Take initiative with your data

MyData is not an organisation, but a term for many projects and initiatives for human-centric data management. It is closely related to the Open Knowledge movement and believes in open standards.

Technology provides valuable services to us, but it comes at a cost – not just monetary, but also with our data. The MyData movement still has a long way to go, but there are steps a person can take today to stay educated and help secure their data.

“I hope that people stay aware and educated about what is going on with their data and technology,” Schwartz says. “Read news about privacy violations and pick services who have better track records. Follow websites like Data Ethics and Personal Data. There are also tools to help you stay secure, such as virtual private networks.”