Helsinki has been awaiting a real concert hall since composer Jean Sibelius put Finland on the map as a music nation.

The core of the Music Centre is the main concert hall with a capacity of 1,700. Outside the hall is a light-filled foyer with glass walls.

Helsinki’s brand new Music Centre, which opened its doors on August 31, 2011, is already earning plaudits from musicians and audiences for its state-of-the-art acoustics.

Finnish classical music aficionados’ long wait for a major concert hall with suitable acoustics to provide a home base for Helsinki’s two top-flight classical orchestras, the Finnish Radio Symphony Orchestra and the Helsinki Philharmonic, is now over. “After 20 years of work, our dreams have now come true!” says Helena Hiilivirta Director of the Helsinki Music Centre.

“Our goal has also been to create a living cultural centre for everybody, a meeting place in the middle of the city. We’re right on a convenient path between the railway station and the main thoroughfare Mannerheimintie,” she adds.

The centre’s pleasant café, a small record shop, an exhibition area and open rehearsals should all help to bring casual visitors in. Hiilivirta is also pleased that the centre’s mirror-like glass covering has attracted young skateboarders and street dancers to the surrounding paved areas and lawns, and she hopes they will soon venture inside. 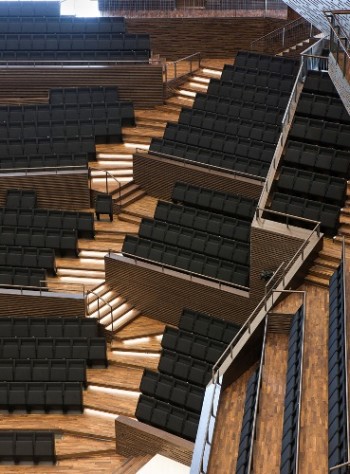 The two main aims of the centre’s architects were to create a building in harmony with the surrounding cityscape in the heart of the Finnish capital, and to create an acoustically world-class concert hall – with help from Japanese specialists Nagata Acoustics.

“We chose proven materials and acoustic structures and a vineyard-style terraced seating layout for the main concert hall with the audience surrounding the orchestra, as in the successful Berlin Philharmonie concert hall, but each hall must have its own unique acoustic design,” explains acoustician Yasuhisa Toyota.

The microshaped, dark-stained birch panels covering the main concert hall’s walls have been designed to diffuse sound and prevent echoes, while also giving Finnish audiences the subliminal sense of sitting in a giant traditional smoke sauna. The seating arrangement separates the audience into intimate clusters angled towards the light-coloured pine-clad stage, which stands out among the otherwise dark furnishings.

Toyota proudly describes the hall’s acoustics as clear and rich. “Recordings on media like CDs are so wonderful today, enabling listeners to hear every single note clearly, so it’s frustrating if you don’t get the same experience in concert halls,” he adds.

In addition to the 1,700-seat main concert hall, the centre includes an underground level with five smaller concert venues and ample space for performers to tune up or chill out. 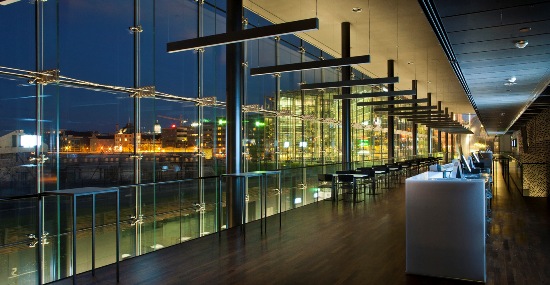 The Music Centre forms a cultural centre for everybody, a meeting place in the middle of the city.Photo courtesy of Music Centre

The centre also provides a new base for the renowned Sibelius Academy, where young elite Finnish musicians learn their trade. “As well as our new teaching classrooms and studios, we’re delighted that the centre will enable our students to interact and collaborate with professional musicians and take part in their master classes,” says the academy’s rector Gustav Djupsjöbacka.

Highlights of the centre’s opening season include a gala Rachmaninoff concert by Armenian pianist Denis Matsuev with the Helsinki Philharmonic and a show by the unique Finnish rock group Apocalyptica, whose members include cellists trained at the Sibelius Academy.

Tickets for the autumn’s events are selling out fast with Finnish music-lovers keen to see – and hear – the new €188-million centre for themselves.