Exploring the Finnish affinity for coffee

Did you know that the Finns are among the biggest coffee drinkers in the world? We ask a few of them why that is.

The Finns consume an amazing 12 kilograms of coffee per capita annually, putting them at the top of the world. (This cup is from Finnish tableware manufacturer Arabia.)

Who would have guessed? The Finns are among the biggest coffee drinkers in the world, and have been for decades. Every Finn has his or her own reasons for loving coffee.

When she starts talking about coffee, Erja Korhonen is almost unstoppable. A television scriptwriter, she admits that she can’t start her day without drinking two big mugs, prepared in a typical Finnish way with a bit of milk and no sugar. “I like the way I feel after drinking it,” says Korhonen, who also says she is quite picky about her coffee.

Finnish coffee is often made from light-roasted beans and tastes a bit acidic. Yet tastes have expanded, and nowadays Finnish producers and the country’s booming café culture cater to all preferences, offering a spectrum from light to dark.

Café culture is booming in Finland. (This table lives at Johan & Nyström in Helsinki.)Photo: Joanna Nylund

According to the International Coffee Association, each Finn consumes 12 kilograms of coffee per year. This makes Finland the second-largest country in the world for per capita coffee consumption. If it was calculated differently, it might even take first place: Luxembourg currently holds the lead, not because of the coffee habits of its inhabitants, but because of cross-border trade with its neighbours.

The love story between Finns and their kahvi has lasted for more than a century. Finnish novels, paintings and essays from the early 20th century all show how important the drink had already become.

Even nowadays, Finns often like to tell anecdotes about their forebears’ relationship to coffee. Maria Oiva, another Finnish coffee lover, smiles when she talks about her grandfather. “He was a theatre director in Helsinki,” she says. “When he was working, his cup of coffee always had to be full. One day, he had some health problems. The doctor asked him how many cups of coffee he drank every day. He had no idea! So he started to count. He reached 35 cups a day. That’s huge!”

When she tells the story to her Finnish friends, Maria says they are very surprised at first. “But then they think for a while and say, ‘Well, yes, maybe that could happen to us, too.’” 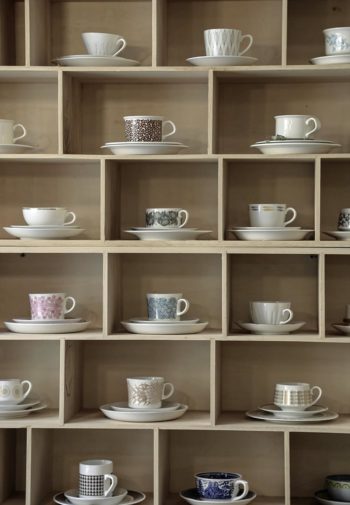 Pick a cup, any cup: Tools for coffee drinking are on display at Andante, a café in Helsinki.Photo: Joanna Nylund

Lasse Vidman, an award-winning Finnish barista, says their passion for the hot beverage is hard to explain. “Part of the reason could be that we live in a cold country, so we need to drink warm, sustaining beverages,” he says.

He also suggests another, more sentimental reason: “Coffee is also linked with our best memories. For instance, when I was a child, I loved to go ice-fishing in the winter, with a thermos full of good, hot coffee in my bag. I am also sure that every Finn remembers where he or she was when he had his or her first taste of coffee.”

Coffee also forms an important part of social interaction in Finland. Korhonen has noticed it at her workplace. “Coffee breaks the ice,” she says. “During the coffee break, my colleagues and I talk about other things than work. We get to know each other. And all this thanks to coffee. Can you believe it?”