In all weather, postman Johan Simberg delivers to far-flung islands – by boat, by hydrocopter, or even on ice skates.

We meet letter carrier Johan Simberg to find out how his daily deliveries represent a vital connection with the outside world for islanders in the Finnish archipelago.

On a hazy morning Simberg welcomes me onto a small motorboat by the harbourside at Korpoström Archipelago Centre, two hours southwest of Turku along an island-hopping route of roads, bridges and ferries. I’m joining him on his round, delivering letters, newspapers and bills to dozens of families living in this beautiful part of Finland’s labyrinthine southwestern archipelago. 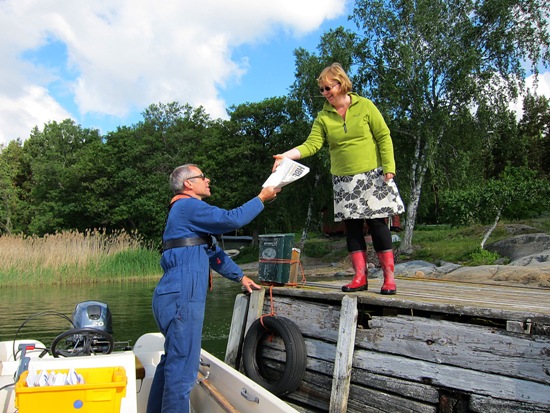 “I deliver the post five times weekly all year round,” explains Simberg. “To make this possible in all conditions I need many different kinds of transportation, including a hydrocopter, a snowmobile, an all-terrain-vehicle, a kick-sledge, skis and ice-skates!”

Some islands are only inhabited during the summer, but even in winter the Finnish postal service pledges to provide daily deliveries wherever people live. Today, with the sun shining over the myriad green islands dotting the blue Baltic, Simberg’s round feels like a pleasure cruise. But when blizzards blow or temperatures plummet below minus 20 degrees Celsius (four below zero Fahrenheit), taking the post to the islands’ year-round inhabitants becomes a heroic one-man struggle against the elements.

Small postboxes are conveniently nailed to the wooden jetties by every island home, but as we approach, the locals invariably stroll down to the shore to greet Simberg. “I might be the only person they see for weeks,” he says. “I often find myself providing social services as well as news and post.” 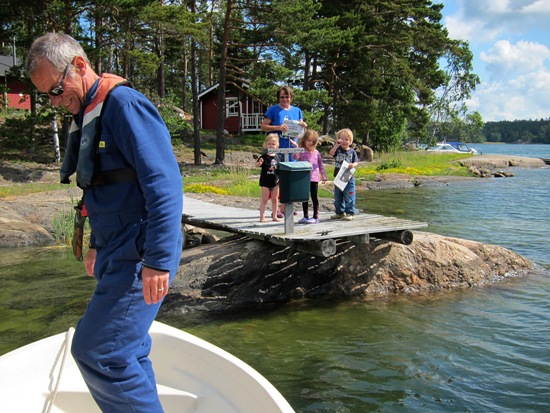 On remote islands the arrival of the post is a social event, and Simberg is often invited for coffee and a chat. Photo: Fran Weaver

Thanks to his reputation as a willing handyman, Simberg is often asked by islanders to help with repair work – or to deliver extra goods ranging from groceries to fridges or even hot tubs. The archipelago postman’s daily visits are particularly vital for the islands’ older residents. Once Simberg had to urgently ferry an ailing islander to the mainland and call an ambulance to meet her.

“I feel privileged to be part of the islanders’ lives and provide this connection to the outside world – though my round can take a long time in the summer when everyone wants to offer coffee and have a chat!” he says.

In an age when public services are increasingly privatised and expected to make profits, Simberg hopes the post will continue to reach isolated communities: “The islanders strongly defend their right to healthcare, schools and the post, and archipelago people are good fighters!” 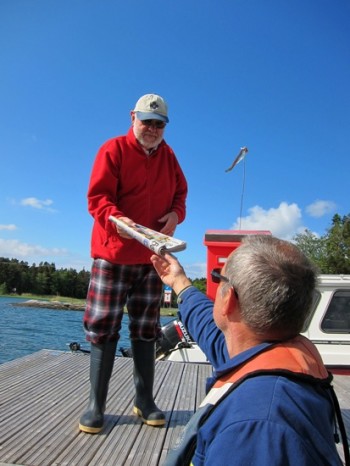 Almost every home receives the local Swedish-language newspaper. Though 90 percent of local residents are Swedish-speaking Finns, recently Finnish-speakers have increasingly been acquiring holiday homes in the islands. Some natives regret that this is changing local cultural life, but Simberg welcomes the newcomers: “Without the holiday-makers the islands could become depopulated as young locals move to the mainland to study and work.”

In his previous life on the mainland, Simberg, 61, was a well-known actor who appeared in many theatre, film and TV productions. Today he clearly enjoys the slower pace of life in this scenic archipelago, encountering wild geese, seals and eagles on his daily round: “In my job every day is different. I’m lucky that it fits in with my other main livelihood, building wooden boats.”

After seven years plying these waters 300 days a year, usually alone, Simberg credibly claims to know every single rock, but he remains safety-conscious even in fair weather: “I always wear my life-vest, and use a dead man’s grip that will stop the boat if I fall out. I’ve sometimes lost engines, oars, propellers, and rudders – but never the post!” he says, grinning.