Light, strong, warm and environmentally friendly, wood is making a comeback in construction and popping up in some unexpected applications.

Wood has always been used to build individual homes in Finland. In recent years, its use in multistory and public buildings has also increased, thanks to the development of versatile, cost-effective timber and board elements. Consumers also appreciate wood as a traditional and ecological material that gives rooms a warm atmosphere.

A landmark with contrast 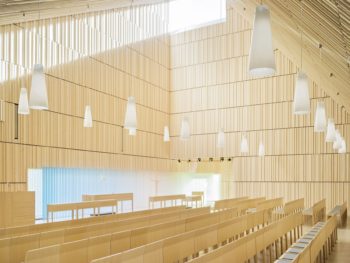 Suvela Chapel, Espoo; designed by OOPEAA; completed in 2016
The sculpted silhouette of Suvela Chapel is a new landmark in its district, presenting an intriguing face from each new vantage point. The copper façade contrasts strongly with the wooden surfaces within. Its inner courtyard is intimate and inviting. 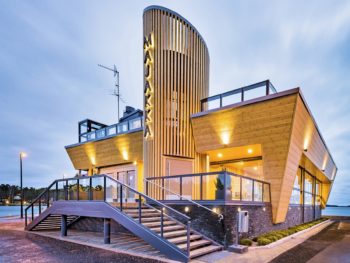 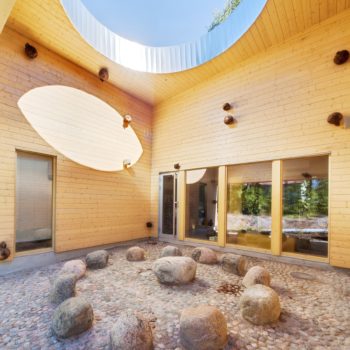 Omenapuisto daycare centre, Helsinki; designed by Häkli Architects; completed in 2013
There is a playfulness about the details of this creche, both inside and out. Natural slopes are utilised for slides and climbing areas. The wooden cladding has been left in its natural state, so it will turn grey in the course of time, except for the white-painted patterns. The paved internal courtyard opening onto the foyer has a ceiling with a large circular opening.

Inspiration from the forest 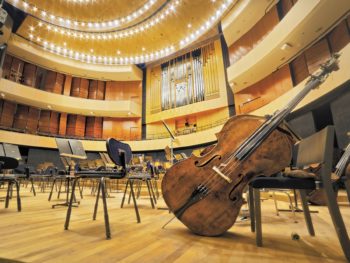 Sibelius Hall, Lahti; designed by Hannu Tikka and Kimmo Lintula; completed in 2000
The impressive wooden concert and congress centre is located on the lake waterfront. This was the biggest public wooden building created in Finland in more than 100 years. According to the architects, the shape was chiefly inspired by the forests of Finland. 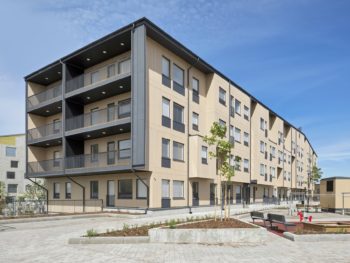 Linnanfältti district, Turku; designed by Schauman Architects; completed in 2019
Construction on this new low-rise district of wooden buildings began in 2016. Several firms of architects were involved. Its modern design contrasts with the ancient castle of Turku, from which the area takes its name. Wooden room elements give multidimensionality to the façade at 8 Fleming Street.

The world’s most beautiful filling station 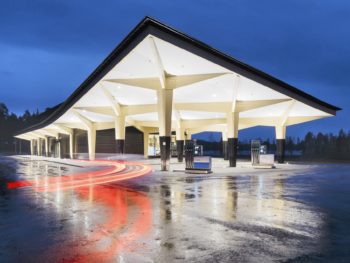 Niemenharju Rest Area, Pihtipudas; designed by Studio Puisto Architects; completed in 2016
The rest area at Niemenharju is located on the E75 highway at a beautiful spot next to a large pond and a ridge. The main structure is comprised of 24 treelike columns supporting a huge canopy that curves upwards towards the road. The buildings here include a restaurant, a convenience store, sleeping areas and even a sauna. The filling station was ranked the world’s most beautiful by London-based architecture website DesignCurial. 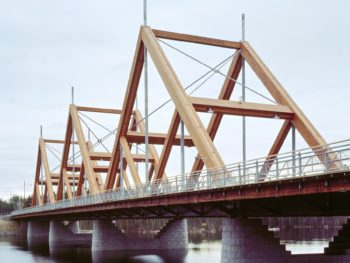 Vihantasalmi Bridge, Mäntyharju; designed by Rantakokko & Co; completed in 1999
The bridge crossing the Vihantasalmi Straits on Highway 5 replaced an old run-down steel bridge. The design successfully combines clean structural lines and practicality, but at the same time is respectful of the traditions of wood construction.

A quiet spot in the midst of city 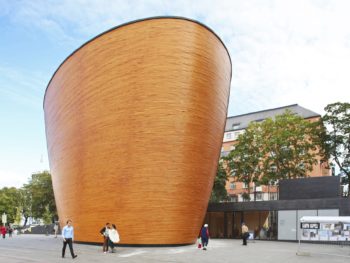 Chapel of Silence, Kamppi, Helsinki; designed by K2S Architects; completed in 2012
The Chapel of Silence is located in the neighbourhood of Kamppi, in the heart of the city. It provides a quiet space in the midst of urban hustle and bustle. The warmth of the enclosing wood is a strong element in the tranquillity of the bowl-shaped building. 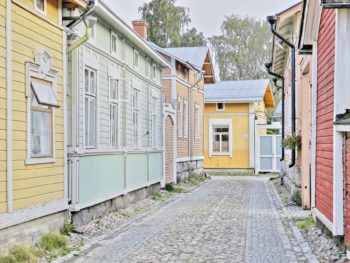 Old Rauma
The town of Rauma, in western Finland, was founded in 1442, making it the third-oldest in the country. Old Rauma is a Unesco World Heritage Site and the largest unified wooden town in the Nordic countries. Approximately 700 people live in the 70-acre area, which contains 600 buildings. 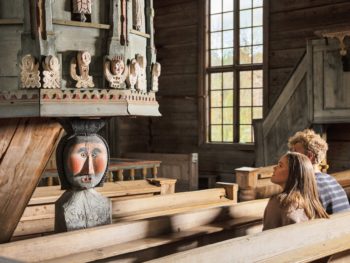 A Unesco World Heritage Site, the Old Church at Petäjävesi, central Finland, was built by land-owning peasants between 1763 and 1765, and displays their masterful carving skills. It is beloved by the residents of Petäjävesi, and thousands of enchanted tourists visit it every year.